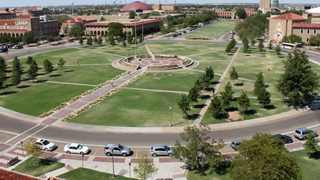 Texas Tech has since grown to include more than 30,000 students, 11 colleges, a law and medical school, and a sprawling campus.

In recognition of the milestone, a reception with cake and refreshments will take place at 2 p.m. Monday (Feb. 11) inside the Student Union Building courtyard.

“This is a great time for Matadors and Red Raiders to take a moment and reflect on the wonderful history, memories and life-changing events that being associated with this great university have produced over the last 90 years,” said Interim President Lawrence Schovanec. “What started as a vision to provide educational opportunities in West Texas has grown into a world-class institution of higher learning. As a result, the impact of our graduates, our faculty, our students and our research has been recognized worldwide. Here’s to another 90 years of Texas Tech pride, tradition and class.”

In February 1923, Texas Technological College existed on paper. However, the physical location of the school had not yet been determined.

“The governor appointed a locating committee to accept proposals for the site of the new college and to visit those sites to determine where it would be eventually located,” said Lynn Whitfield, associate archivist at the Southwest Collection/Special Collections Library at Texas Tech. “We had more than 30 proposals from various towns in West Texas submitted.”

Lubbock was chosen as the future site of Texas Technological College in August 1923 with the help of Texas State Senator William H. Bledsoe, who authored Senate Bill 103 and called Lubbock home. The Lubbock community also played a key role by coming out to celebrate and greet the locating committee during its visit.

With the site of Texas Technological College chosen, the cornerstone for the Administration Building was laid Nov. 11, 1924. Five schools began classes in the fall of 1925, including Agriculture, Arts & Sciences, Engineering, Home Economics and Music.

“Just as Paul Horn, the first president of Texas Tech boldly envisioned, our university continues to dream big and exceed expectations,” said Kent Hance, chancellor of the Texas Tech University System. “As we celebrate the university’s 90th birthday, this vision has never been more evident than through the recent success of our $1 billion capital campaign. The future is exciting for Texas Tech University, and we look forward to sharing our next 90 years of achievement with our loyal friends and supporters.”

Texas Tech has grown throughout its 90-year history: 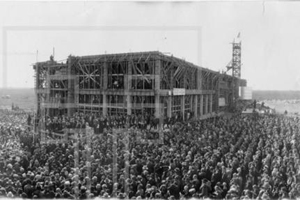 Thousands of people attended the laying of the cornerstone of the Administration Building.

“All of this growth brings in more people, more students,” Whitfield said. “You see over the decades, the university keeps expanding and the town of Lubbock keeps expanding because the faculty members are buying houses, students are staying here and having families. The history of the two is just so interconnected in ways that you can't really fathom one without the other.”

Texas Tech is also on its way to becoming an Association of American Universities Tier One University by achieving the National Research University designation. Texas Tech continues to grow its infrastructure with new facilities such as the Jerry S. Rawls College of Business, Talkington Residential Hall, United Commons and improvements to Jones AT&T Stadium.