As Texas Tech celebrates its 90th anniversary, the mascot's earliest supporters revel in his rise. 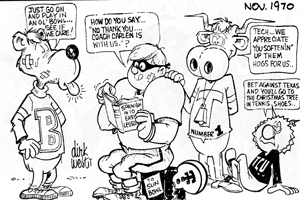 Dirk West initially drew Texas Tech's first mascot as Ol' Red, a football player with a mask. Soon after he came up with the Raider Red we know and love today.

The crowning of Raider Red as the 2012 Capital One National Mascot of the Year on Jan. 1 excited and inspired thousands of fans who had voted online tirelessly for the mustached character to be victorious.

But no two fans were more thrilled than two who were behind the creation of the beloved and now iconic Texas Tech University mascot.

“I was so excited, I can’t tell you exactly how I felt,” said Mary Ruth West, wife of the late cartoonist Dirk West, whose drawings inspired Texas Tech’s costumed mascot. “I think that not only was it a tribute to the mascot program, but I think it was also a tribute to my husband. The family was thrilled when we heard the news.”

Jim Gaspard also was delighted to hear of Raider Red’s victory. A 1972 graduate of Texas Tech, Gaspard brought Raider Red to life from West’s drawings in 1971 by creating the first costume from Salvation Army boots and papier-mâché.

“My wife Dinah is an avid Facebook person and she picked up on Red’s success in the early voting,” Gaspard said. “As he advanced each week, many of our college friends contacted us, so we were closely tracking the voting. Of course, we voted, and voted and voted, and so did our kids, friends and relatives.”

Born of paper and ink

Dirk West was born in Littlefield in 1928 and moved to Lubbock when he was six months old. He graduated from Lubbock High School, where he drew cartoons for the school paper; attended Texas Tech where he also drew cartoons for The University Daily, and graduated in 1954 with a degree in advertising.

In the early 1960s, West began contributing sports cartoons to the Lubbock Avalanche-Journal. He drew two cartoons a week during football season, with each cartoon appearing in the sports section of the newspaper. Early depictions of the Red Raider character, then known as “Ol’ Red,” were as a hulking football player wearing a mask. It was after the 1970 season that West noted the change in the Red Raider’s appearance.

“But don’t ask me why,” laughed Mary Ruth. “I have no idea how Ol’ Red of the 1969 cartoons evolved into Raider Red. But I think maybe he thought it was time to change it.”

And Raider Red continued to evolve. “It had something to do with Dirk’s personality and how he was feeling at the time,” West said.

Although the cartoons of Raider Red came to represent Texas Tech in the newspaper, on football programs, and on posters, it was Gaspard, a Saddle Tramp and advertising major, who lifted the idea from the pages of the sports section and brought him to life.

In 1971 the Southwest Conference ruled live animals were not allowed to travel to visiting fields unless invited by the home team. Since the Masked Rider could not attend away games, Gaspard felt a temporary replacement was necessary.

The first Raider Red costume was made by Saddle Tramp Jim Gaspard in 1971.

“There wasn’t a book to read, and there wasn’t a design, it was all made from scratch,” Gaspard said. “I still have the SWC poster of Ol’ Red where I scaled what I thought to be a three-dimensional character to fit my body frame. I tried to keep everything to scale and detail to his drawing, from head to boots.”

The head, complete with cowboy hat, moustache and ears (sculpted to his then girlfriend, now wife Dinah’s ears) was papier-mâché over chicken wire, the shoulder support was old leather football pads, the old boots were found at the Salvation Army downtown and painted red, and the belt/holster leather material came from Tandy, Gaspard said. The rest of the costume was sewn by a theater arts student he met in French class.

Gaspard was a resident advisor in Clement Hall both semesters, and it was there that Raider Red came to life. Being a Saddle Tramp, he said, was probably the greatest influence on him to create Red as a traveling mascot because of the conference restrictions for live mascots.

“Dirk adopted the Raider Red name later that 1971 season and dropped the ‘Ol’ Red’ name, probably the only influence I had on his Avalanche-Journal cartoon column,” Gaspard said.

“Thanks to Texas Tech’s adoption, Saddle Tramp sponsorship, and the influence of other spirit boosters, Raider Red’s legacy finally reached the level of a national champion this year. I’m very proud to be a parent of his,” Gaspard said.

“He has come a long way since his youthful beginnings in the fall of 1971. Dinah and I are still amazed at how big he’s become on campus for the Saddle Tramps and Tech’s spirit organizations, 41 years after he stepped onto Jones Field for the Tulane pep rally.”

A banner signifying Raider Red being named national mascot of the year was unveiled at a recent basketball game.

“‘A long way’ is right,” said Stephanie Rhode, Spirit Program director in the Center for Campus Life, “as the Raider Red program has expanded in size, scope and expectations. Originally only Saddle Tramps portrayed Red, but in 2005 the women’s spirit group, the High Riders became eligible to audition as well.”

Rhode explained that because Raider Red is highly sought after to show up everywhere – at games, on campus and in the community – averaging about 150 appearances in an academic year, four students are chosen to don the costume each year.

The costumes, no longer handmade, are now professionally made, costing thousands of dollars for the head, hat, boots, guns and other pieces that make Raider Red who he is. Victory in the National Mascot Challenge netted a $20,000 scholarship to help fund the mascot program; the Texas Tech Federal Credit Union came on board this year as the official sponsor of Raider Red.

As colossally successful as the Raider Red program has become, producing a national champion, the beginnings always will be the pen, ink and heart of Dirk West and the red-painted boots, homemade head and spirit of Jim Gaspard.

(Gaspard is a vice president at Behringer Harvard Funds in Addison. Mary Ruth West continues to be active in the Texas Tech and Lubbock communities, and in 1996 the West family donated the rights to Raider Red to Texas Tech, with all the proceeds from the use of Raider Red’s image to benefit Texas Tech’s general scholarship fund.)