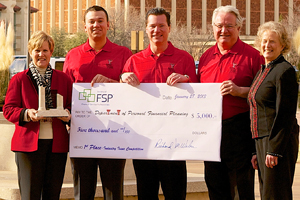 Tyler Chaney and David Wilder, both graduate students at Texas Tech, were chosen by a panel of judges through a blind review process as one of the top three teams to advance to the final oral round of the competition based on their written solution, which was previously submitted in October.

The title of this year’s issue was “Which Way to Go? Best Practices in Identifying and Evaluating Specific Careers in the Financial Services Profession.” Chaney and Wilder chose to evaluate three professions; including a life insurance company actuary, a fee based certified financial planner and an advanced life insurance professional.

“I think the judges enjoyed the way Tyler and David conducted in-depth research on the professions within the Financial Services industry,” said John Gilliam, associate professor in the Department of Personal Financial Planning. “They also did a great job presenting their paper in an articulate and professional presentation on a very broad industry.”

The judging panel, which was selected among experienced practitioners and members of the FSP society, announced Chaney and Wilder as the winners of the $5,000 scholarship at a reception following the oral presentations. This money will go to the Texas Tech Personal Financial Planning Department.

Two teams from Texas Tech had entered into the competition; however, due to the set of rules established by the FSP, only one team per university could compete in the final oral competition. As a result, the second team, which also consisted of graduate students, received honorable mention for their submitted paper.

This is the second consecutive year Texas Tech has placed in the top three teams at the Industry Issue Competition.