The publication names it as one of the top five destinations to see evidence of first Americans. 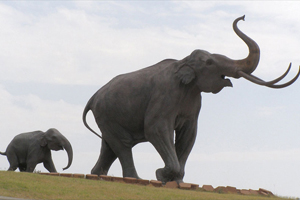 Lubbock Lake Landmark is an archaeological and natural history preserve at the northern edge of the city of Lubbock.

The story covers different locations across the U.S. where visitors can see the cultural remnants and animal remains left by the original settlers of this continent. It mentions the exhibits at Lubbock Lake Landmark, such as the hiking trails and the interpretive center that displays the evolution of the site from a fast-moving streambed to a marsh and documents the peoples who lived at the site.

“National recognition of our public programs at the landmark in a publication that is global in extent greatly serves to build on the international research reputation of the Landmark,” said Eileen Johnson, executive director for the Museum of Texas Tech University and director of the landmark. “The designation acknowledges that we are doing good things at the landmark to engage the public in the early cultural heritage of the region that is significant on the national level. Increase in public awareness is always a good thing and generally leads to greater numbers of visitors and more outreach opportunities.”

A unit of the Museum of Texas Tech University, the Lubbock Lake Landmark is an archaeological and natural history preserve at the northern edge of the city of Lubbock. The Landmark contains evidence of almost 12,000 years of occupation by ancient people on the Southern High Plains.

The first explorations of the site were conducted in 1939 by the West Texas Museum (now the Museum of Texas Tech University). By the late 1940s, several Folsom Period (10,800-10,300 years ago) bison kills were discovered. In a location of an ancient bison kill from a then-unidentified Paleoindian group, charred bison bones produced the first-ever radiocarbon date (currently the most accurate form of dating) for Paleoindian material (9,800 years old).

The Lubbock Lake Landmark serves as a field laboratory for geology, soils and radiocarbon dating studies, as well as being an active archaeological and natural history preserve.

The Lubbock Lake Landmark is an archaeological and natural history preserve that contains evidence of almost 12,000 years of occupation by ancient peoples on the Southern High Plains. Discovery at the site began in 1936, when the first Folsom point was found, and continues to this day with excavation on-site and at other sites throughout the region.

The landmark welcomes visitors of all ages throughout the year. Guided and self-guided tours, public programs, programs for school children and camps are part of the landmark’s ongoing mission to provide a research and educational facility to and to reveal and preserve the history and culture of Texas and the nation.

The Lubbock Lake Landmark is listed on the National Register of Historic Places and is a designated National Historic and State Archaeological Landmark.

The Lubbock Lake Landmark is located at 2401 Landmark Drive, north of Loop 289 in Lubbock.

For more information, contact Deborah Bigness, the manager of site operations, at (806) 742-1116 or Deborah.bigness@ttu.edu.