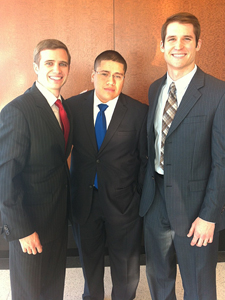 The team – comprised of third-year Brian Sullivan of Austin, and second-year students Jefferson Fisher of Silsbee and Josh Avelar of San Antonio – is now preparing for the national finals after securing Texas Tech’s third regional win in four years at the tournament.

“Numerous hours of practice enabled the team to prepare meaningful and persuasive ‘motions in limine,’ have ready responses to evidence objections, and to be ready to handle any issue on cross examination,” Baker continued. “As they advanced in the competition, they got better and better, until they took the championship. Talent, dedication, persistence and hard work secured the win.”

The National Trial Competition, administered by the Texas Young Lawyers Association and co-sponsored by the American College of Trial Lawyers, is the largest and most prestigious mock trial tournament in the country.