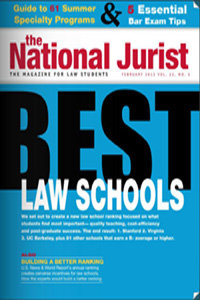 Texas Tech Law placed No. 9 in overall quality and No. 2 for student satisfaction in what the magazine described as “a new law school ranking focused on what students find most important.”

“Our goal was to provide an alternative ranking that was focused more on results and service, and that could provide legal education with admirable incentives,” editors wrote.

Graded on nine criteria assessing postgraduate success, quality of teaching and cost-efficiency, Texas Tech received a final GPA of 3.38 out of 4.0, placing ninth among 157 law schools with a 2.0 GPA or higher.

Darby Dickerson, in just her second year as dean of the school, was quoted in the article, saying she admired Texas Tech’s faculty even before she took over as dean.

“While I was interviewing (at Texas Tech), I was very impressed with the relationship among the students and faculty,” Dickerson told the magazine. “Not only is there a sense of mutual respect, but the students mean a lot to the faculty. They give so much of their time and energy to working with the students both inside and outside the classroom.”

To view the rankings and read more about their methodologies, visit http://www.nxtbook.com/nxtbooks/cypress/nationaljurist0213/index.php#/0