The livestock, meat and wool judging squads returned from Denver with high honors.

Texas Tech University’s livestock, meat and wool judging teams began their 2013 season at the National Western Stock Show in Denver this past week. The livestock and meat teams both returned to Lubbock with championship honors, while the wool team was narrowly defeated and finished second.

“These teams show the balance and strength of the program we are building at Texas Tech,” said Mark Miller, Horn Professor and San Antonio Stock Show and Rodeo Distinguished Chair in Meat Science. “These students represented Texas Tech with excellence. They are a hard-working group that truly understands the value of teamwork.” 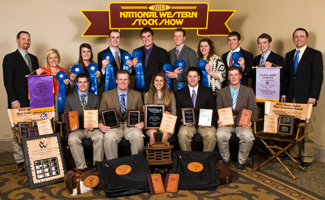 In the livestock judging contest, Texas Tech passed the competition in the reasons room, winning the division by 19 points and securing the overall title by 5 points over Oklahoma State University. Kansas State University, Colorado State University and the University of Nebraska completed the top five teams.

Three of the top ten individuals were members of Texas Tech’s team. The team is coached by Ryan Rathmann, the first John W. and Doris Jones Endowed Professor in Texas Tech’s Department of Animal and Food Sciences, along with graduate student Brady Ragland. 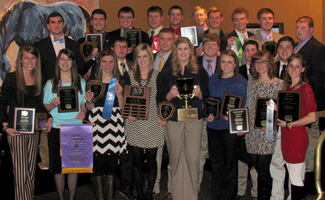 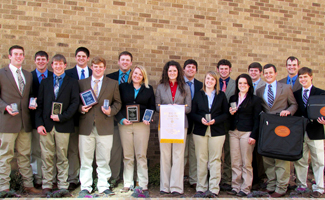 The team is coached by instructor Aaron Jennings who is assisted by undergraduates Brittany Thompson and Travis Begley.

All three teams will continue to compete at additional contests this spring against hundreds of contestants from across the United States. Judging contests are designed to teach students communication skills, rational decision making skills and give them the ability to excel in a competitive environment under pressure. These skills are developed to help students excel both professionally and personally after college.