The steed made his debut at bowl game, and now there will be a contest to name him. 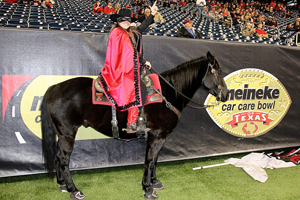 The new horse along with Masked Rider Ashley Wenzel at the Meineke Car Care Bowl in Houston's Reliant Stadium on Dec. 28.

Wanted: Strong and sturdy with mild temperament, willing and proud demeanor. Not easily flustered or distracted. Ability to move quickly while carrying substantial loads. Ability to take direction and work with a team.

These qualifications have never been an easy or swift find when it comes to choosing a horse for the Masked Rider program at Texas Tech University.

It took Sam Jackson about three months and more than a dozen candidates to find the perfect horse with the right attributes to replace Midnight Matador, who was retired last fall due to a health issue. Jackson is associate chair in Texas Tech University’s Department of Animal and Food Sciences and Masked Rider Program advisor.

Texas Tech has completed purchase of Hollywood at Dusk or “Woody” as he is nicknamed, from a ranch in Tulia. He was the horse ridden by Masked Rider Ashley Wenzel at the Meineke Car Care Bowl Dec. 28.

“Woody was chosen as the new mount for the Masked Rider because he best fit all of the criteria that a horse in this role must possess,” Jackson said. “Several of the horses that were evaluated met some of the criteria, but the list of potential horses became quite short when all of the necessary traits were evaluated. The most significant requirement for a horse in this role is to be absolutely well-trained and quiet in his disposition. Most of the horses that were evaluated were simply not quiet-minded enough or did not have the natural disposition to be able to excel in this position.”

Jackson said Woody was tested extensively in situations that mirrored what he would experience in this demanding role. He attended band practices, observed fireworks, met Raider Red, watched and heard pistol and cannon fire, carried flags and led the team onto the field in a large indoor football stadium with several thousand screaming fans.

“I appreciate the work of Dr. Jackson and members of the Masked Rider Advisory Committee in working quickly to thoroughly review and select Texas Tech’s new Masked Rider horse,” said Amy Murphy, dean of students. “It took a great deal of effort on the part of many Texas Tech staff and supporters during this interim period to have the Masked Rider represented at the final regular and post season football games and to appropriately test the new horse candidates. The outpouring of support from Texas Tech fans and alumni around the retirement of Midnight Matador and the excitement around his successor has been extraordinary.” 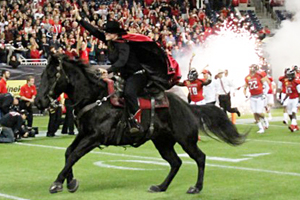 The new horse made his first football ride at the Meineke Car Care Bowl and performed well.

“Woody is a very well-trained gelding that is responsive to his rider’s cues and commands,” Jackson said. “He has a soft, quiet mouth and is responsive to the leg cues that a rider must give a horse to be able to control and maneuver him in crowded and changing environments.

“Through all of the testing he maintained the same calm demeanor and attitude that he expressed when I rode him the first time in an outdoor roping arena with no one around but cattle and horses. After passing all of the behavioral tests, the final critical criteria that he met was that he was a big, stout, sound-structured, attractive black gelding that should be capable of carrying Masked Riders across the turf for many years to come.”

Texas Tech is holding a naming contest for the mascot’s official Texas Tech name and will begin taking entries at 9 a.m. Friday (Jan. 18) through 5 p.m. March 1.

Email submissions to namethehorse@ttu.edu.  Only one entry is allowed per email address. In the event the winning name is submitted by multiple entrants, the email bearing the earliest time/date stamp will win. The name will be announced at the Transfer of Reins on April 19.

Behind the Scenes: How to Get Accepted to Texas Tech

Texas Tech University students interested in trying out for the Masked Rider for the upcoming year may pick up applications beginning Tuesday (Jan. 22) at the Center for Campus Life office in Room 201 of the Student Union Building.

The audition cycle is as follows: