Sociologists find reasoning behind them similar to a 100-year-old theory that powered Industrial Revolution. 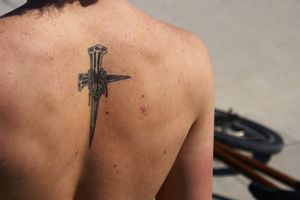 In Koch and Roberts’ study, the two gathered tattoo survey data from about 70 undergraduates at four American universities. Two were large, state-supported public institutions, and the other two were highly selective, private religious universities.

When it comes to religious tattoos, two Texas Tech University sociologists say the reasoning and spirit behind them is strikingly similar to a 100-year-old theory about how the Protestant work ethic powered the Industrial Revolution.

Both sociologists said the sentiment behind the tattoos is reminiscent of Max Weber’s famous 1905 sociological work “The Protestant Ethic and the Spirit of Capitalism.” Koch and Roberts’ research is part of a larger study called Religion and Deviance at Four American Universities, which expands their research from the previous five years to give more national context.

“This particular article came out of some data we gathered and started as an afterthought to a pilot study,” Koch said. “At the end of the questionnaire, we appended an essay question and gave respondents a chance to tell us, if they had one, the story of their religious tattoo. As we started reading through the essays they wrote for us, we started to hear what we knew Max Weber would have appreciated.  That, in a sense, these respondents were telling us ‘I want everyone to know that I believe I’m one of God’s people; and here is the evidence of that.’”

Go back nearly 100 years ago, and Weber described in this founding text of economic sociology how Calvinist views on their purpose on the planet helped to drive the Industrial Revolution, Koch said. A person’s profession, no matter how grand or lowly, was seen as an addition to the greater common good, and thereby blessed by God as a sacred calling. Work, for these Protestants, became a visible expression of their faith, and consequently helped to drive the machinery of the unplanned Industrial Revolution of the 19th century.

“Weber argued that the diligence and integrity that we often associate with Protestant work ethic was in one sense a way for individuals to demonstrate to themselves and others that they must be one of God’s elect, otherwise why would they be doing so well,” Koch said. “We are making the parallel saying that the rationale behind and the energy it takes to get a religious tattoo is perhaps to show the same thing.”

In Koch and Roberts’ study, the two gathered tattoo survey data from about 70 undergraduates at four American universities. Two were large, state-supported public institutions, and the other two were highly selective, private religious universities.

Koch and Roberts both noted this same Weberian spirit of public expression as respondents to their last-minute questions repeatedly indicated that their religious tattoos were, for them, evidence of the permanence of their faith, outward signs of religious commitment, or memorials to those they’ve loved and lost and presumably who they hoped went to heaven when they died. 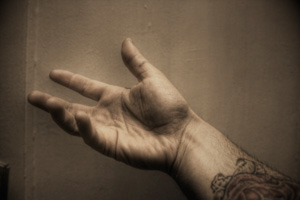 According to the study, the permanence of a tattoo drew many to get one as a permanent insignia of their faith.

About 65 percent of the respondents with religious tattoos came from secular state schools, the two found. However, 44 percent of the Southern Baptist students that reported having tattoos indicated that at least one was religious.

The permanence of a tattoo drew many to get one as a permanent insignia of their faith.  Several indicated they got it in memory of someone that they loved, Koch said, while others got it as a way of telling themselves and others that their life had changed.

“One respondent explicitly said ‘I got this tattoo after I lost my virginity as a recommitment to purity,’” Koch said. “It was surprising and a happy accident that the information mirrored where Weber was coming from. I hadn’t anticipated that at the end of the day we would have what I think is a useful teaching tool for showing students what Weber was about using this new imagery.”

For a copy of the research paper, visit http://courses.ttu.edu/jkoch/Research/PERT.pdf.

Previous research in which Koch, Roberts and others surveyed students’ attitudes and experiences regarding religious belief and practice, social behavior and body art can be found at http://courses.ttu.edu/jkoch/Research/Moral%20Community.htm. This became the basis for our current project, funded for more than $100,000 and titled Seeking the Moral Community – Religion, Deviance and Well-being Among American University Students.