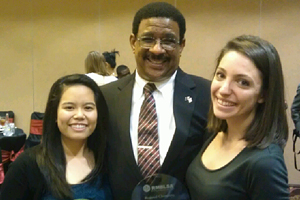 “I thoroughly enjoyed coaching these two young students as they took on the challenges of this competition,” said Vaughn James, Judge Robert H. Bean Professor of Law. “And now we shall begin preparing for the national competition which will take place in Atlanta during Spring Break.”

Each year, each region hosts two advocacy competitions – the Frederick Douglass Moot Court Competition and the Thurgood Marshall Mock Trial Competition.  The top three teams from each region advance to the national finals.