Dancing at the Crossroads: A Cultural Collision 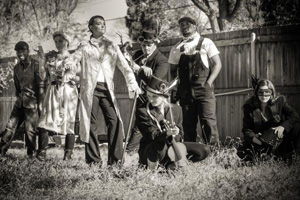 The Crossroads Project develops educational and performance materials that explain the complex meetings and encounters which gave birth to American music. (Photo by Tif Holmes)

That cultural gumbo of sound, rhythm and dance served as the impetus for creating the original dance/theatrical show “Dancing at the Crossroads: A Celebration of Anglo-Celtic and African-American Dance in the New World.”

The show, which features local dancers and singers from Texas Tech, will premiere at 7:30 p.m. on Feb. 1-2 and 8-9 at the Christine DeVitt Icehouse Theater on the LHUCA campus, located at 511 Ave. J.

“I’ve been a practitioner of these styles (Anglo-Celtic and Afro-Caribbean) for four decades, know them intimately and love them passionately,” Smith said. “As a scholar, I’m interested in the interplay of immigrant music in the Americas. I think the performance tells a story whose historical resonance many people won’t have previously recognized. Many folks of course know that immigrant traditions – especially Anglo-Celtic and African-American – played a key role in the synthesis that led to blues, jazz, vaudeville, tap-dance, hip-hop and rock ’n’ roll. However, I think fewer people recognize both the complexity and profundity of that synthesis and the historical depth of the story.”

Smith said the Crossroads Project develops educational and performance materials that explain the complex meetings and encounters – between people, cultures, belief systems, and genres – which gave birth to American music. African, Caribbean, European, and Native American expressive arts whose meetings, since first contact in the 16th century, have created  the complex, idiosyncratic, challenging yet endlessly inventive and popular music forms of the modern era.

These served as the foundations of music and dance such as Stephen Foster’s popular songs to the crossover hits of Eminem and Mary J. Blige, from Appalachian flat-foot dancing to African-American tap, from the contredanse of Haiti and Montserrat to the contras of Maine and the square-dances of Virginia. 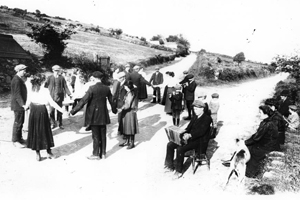 This photo is an example of people dancing in the crossroads in 1891.

Even the comedy of Abbott and Costello to the comic monologs of Sid Caesar and Red Skelton, can be traced, in content and/or intent, to the meetings of Africa, Europe, and the Caribbean in the New World, he said.

“This is a story about meetings, between cultures, peoples, and dance traditions,” he said. “And not only the mythic meetings exemplified by the named characters such as Elizabeth Bennett, Baron Samedi and the Demon Fiddler, but also actual, historical meetings which are the roots of American popular culture. The remarkable thing about this story is that it is, in essence, a true story – this meeting between Afro-Caribbean and Anglo-Celtic dance music traditions is actually where American popular music and dance originated.”

Smith said he arranged songs from Ireland and England; tales of transformation and crossroads magic; blues and gospel from the Mississippi Delta; sean-nos (“old style”) song from Ireland’s Gaelic West; dances and dance music from Ireland, Scotland, and Cape Breton; ritual dances from the Welsh Borders; country dances from England and Appalachia and sea shanties from the North Atlantic, and an audience sing-along as finale.

However, this is more than just a performance, Smith said. Teachers can use this performance along with a body of materials – worksheets, slideshows, participatory classroom exercises, a dedicated website – developed by trained K-12 educators.

The show is part of a new type of research becoming popular in academia, he said.

“The fields of devised theater and engaged scholarship, new fields on university campuses across the country, both investigate the points where creative activity, such as composing and staging a dance show, and research, such as describing the historical, folkloric, and/or mythic sources of the music and dance, can come together,” he said. “These new fields recognize that research and creative activity – especially in the visual and performing arts – are not two different fields, but rather are related fields, which have the creative imagination in common. In 2013-14, Bill Gelber, who directs the show, and I will present solo or joint papers at conferences in Budapest, Brazil, Barcelona, Alabama, California and elsewhere. In addition, we are launching an online journal and symposium on Texas Tech’s campus: the ‘Crossroads Project.’” 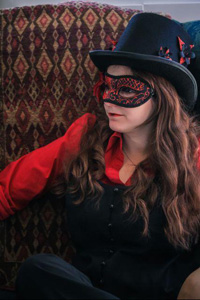 The Morris Dancer, played by Megan White, is one of the characters in the Crossroads Project. (Photo by Tif Holmes)

Gelber, who is head of acting/directing in the Department of Theatre and Dance, said he will direct, perform in the show as a narrator, and use the experience for academic research. He said Smith’s creation will say much about how music has developed as a hybrid of different cultures coming together at the crossroads of two very different worlds.

“I’m looking at the piece as an example of devised theatre and how it uses multicultural collaboration in the same way that the story itself suggests,” Gelber said. “I’m listed in the capacity of ‘stage direction’ but I’m, in a sense, a consultant. It is largely imagined by Chris and the performers.

“It is a unique experience that the audience won’t have come across before.”