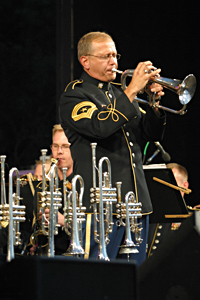 Chuck Seipp culminated his career with The U.S. Army Band as Group Leader of the Concert Band and Senior Soloist.

He took the silver piccolo trumpet out of its case and began to explain why it’s one of his favorite trumpets to play.

Silver and sleek, it almost looks like a toy.  But don’t be fooled by its appearance, said Chuck Seipp, a visiting professor of trumpet and a former member of The United States Army Band “Pershing’s Own” – the highest musical element of the Army.

“It’s small,” he said describing the horn. “You think that its small size would make it easier to play, but the resistance will leave you red in the face.”

He puts it up to his lips and begins to blow. The baroque trilling melody of Jeremiah Clarke’s “Trumpet Voluntary” rings clearly through the studio. Jaws drop and mouths crease into smiles. He’s not just playing the music. Seipp is blowing life into it in a way rarely heard from trumpet players. It’s not just loud or soft or technically correct. It’s more of an expression.

That’s his secret. His gift.  His magic. That’s how he played for U.S. Presidents Reagan, Clinton, both Bushes and Obama. And that, along with emotional control, is what he says is the most important skill he tries to teach other trumpet players at Texas Tech’s School of Music.

Development takes a very long time to become proficient on the trumpet – longer than most instruments it seems. But with lots of practice and the ability to experience a piece of music and portray the emotion behind it, the player and the audience will be amply rewarded.

“If done correctly, making music with the trumpet could be a magical-like musical experience. When you get into the music, one can imagine it’s almost like ‘Alice in Wonderland.’ You’ve got to step through the mirror to get into that other world. When you’re so wrapped up in the music, you’re not even [aware that anyone is listening to you. I’m a fan of analogies in my teaching and just an example how I attempt to get the student’s imagination involved to express themselves musically while overcoming the fear of performance anxiety.”

“Instrumentalists don’t have words like vocalists to tell a story.  We have to tell a musical story with notes on a page, and that is not an easy task.”

When your father is a band director and you’re the youngest of five children who play instruments as well, it’s hard not to become a musician, Seipp said. And when you grow up in the small farming community of Akron, Iowa, there’s plenty of time to learn an instrument.

“The trumpet is what I gravitated toward, and it seemed to be a good fit for me, so I stuck with it,” he said. “Akron was a small community, but it was a strong community musically.”

In middle school, he began flirting with Julie Harris, which evolved into dating in high school. When his family moved to Florida before his senior year, he and his girlfriend maintained a long-distance relationship. That continued when he went to the University of Kansas in 1975, and Julie finished her senior year of high school before following him to college.

“I was his accompanist in high school,” she said. “That’s how we became a couple. We were kind of kindred souls. We were really good friends. When he went with his family to Florida his senior year in high school, I was sad. From that point we knew it would probably be a forever thing. So far, so good.”

Seipp’s two brothers were college music professors, and that career seemed like the logical choice for him as well. He continued studying the trumpet at KU, where he met his teacher and mentor, Roger Stoner.

Stoner had been a part of the Marine Band in Washington, D.C., earning his master’s and doctorate degrees while there. While not the traditional route, Seipp thought a military band might be a good option.

“My senior year at KU, there happened to be only one opening in any of the Washington, DC military bands and that opening was with The United States Army Band,” he said. “I auditioned and made it into that band. I never dreamed I would spend a career in The Army Band.”

Julie said she’d agreed to do whatever would help Chuck excel as a musician. He could audition first before enlisting, and being in Pershing’s Own meant a permanent duty station. In three years (one enlistment), the two planned, Chuck would serve in the band and complete his post-graduate degrees. Then, they’d move on to something else.

“Well, 32 years later…,” she joked. “But, you see, The U.S. Army Band is awesome. It was a great job. It had great camaraderie, became our 2nd family and we were in a culturally rich place to raise a family. We graduated from KU on the 19th of May in 1980. We were married on the 24th. Then he went to boot camp two weeks later in June. We moved all our worldly possessions in a U-Haul trailer and went to the great unknown of Washington, D.C. It was scary, but exciting” 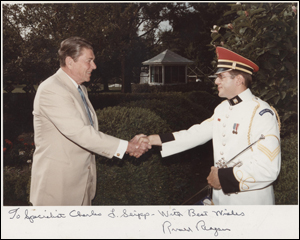 Seipp has played all the inaugural parades since 1981, the first inauguration of President Reagan.

Seipp thought initially that his Army career was a means to an end. However, when he became a part of an organization that performs for world and significant events around the nation and internationally, he realized this wasn’t just a stepping stone at all.

“When my role became more significant in the organization while performing at world events that few have the opportunity to experience, you find you’re part of something really, really special,” he said. “What was initially a stepping stone to reach my ultimate goal of teaching at the college level, became a very easy realization that this was my niche in life.”

“We’ve gotten very close to all the presidents since Ronald Reagan,” he said. “During the 25th anniversary of the Herald Trumpets in 1984, President Reagan invited us to the White House and we met with him in the Rose Garden. We played a little for him and we had our photograph taken with him and shook his hand. He told us stories of when he was a drum major in high school. Reagan, of all the presidents, probably outwardly appreciated the music more than anyone.  Every time he came out of the White House, he would look up at us, and every time after the ceremony he would always wave to us before re-entering the White House.”

But not all events were so joyful. In the ceremonial band, he played numerous times at wreath laying ceremonies at the Tomb of the Unknown Soldier and funerals at Arlington National Cemetery. He also rendered Taps for fallen soldiers in Arlington Cemetery, which Seipp considered one of the most meaningful gestures that a musician in the band could do.

“I became a part of the United States Army Brass Quintet and was able to play in the Capitol Rotunda when President Reagan lay in state,” he said. “So, it was very special for me to be a part of the beginning of his presidential career and then actually at the very end.”

About two weeks after 9/11, the band was scheduled to perform at the Lincoln Center in New York City, Seipp said, and he’d never felt a more important role before an audience: “We performed for a packed house playing patriotic music to a nation that needed consoling.

“After that concert with such heightened emotions and the next morning performing for a ceremony at ground zero, he said. “Those are events I’ll never forget. Music touches people like no other medium – striking a chord within the heart and soul that mere words cannot fully express.  Besides the musical support to significant ceremonies and important events that happen in Washington, D.C., we’re also soldiers supporting the soldier, and we’re uniquely supporting our nation in good times and bad.”

While in the band, Seipp earned his master’s degree in 1986 and his doctorate in music arts in 2001 from Catholic University of America. He and his wife also raised five children. This year, as the last child graduated and left an empty nest, both he and his wife decided it was a good time to try for that higher education gig he’d originally planned for in the ’70s. 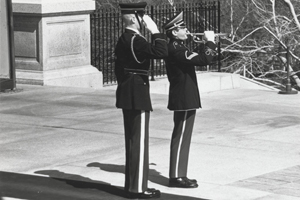 As a member of The U.S. Army Ceremonial Band, Seipp also played numerous times at wreath laying ceremonies at the Tomb of the Unknown Soldier and funerals at Arlington National Cemetery.

Earlier this year, he applied and was finalist at the University of Illinois and Texas Tech. But Seipp said Texas Tech was exactly where he wanted to start his higher education teaching career as a visiting professor.

“I came here and quickly realized this is where I belong,” he said. “This is a place similar to where my wife and I went to undergraduate school at the University of Kansas. It has a really strong music education department - a great university, lots of tradition. I grew up with musical tradition. I went to school at a place that had incredible tradition. I was involved with the Army which has obvious tradition.  Then to come to a place like Texas Tech and observe in a very short time, the special traditions that happen here; I am just so thrilled to be a part of this place. The leadership in the School of Music by Bill Ballinger; I’ve never seen anything like it. There’s such a positive spin on this place; the students and faculty are amazing.”

While fundamentals are important on trumpet, Seipp said he’d rather listen to a musician playing the trumpet instead of a trumpet player playing the trumpet. That’s one of the main points he said he tries to instill in his students so that they express musicianship rather than just play music notes.

Along with hour-long lessons with students in his studio and a weekly master class, he also coaches a graduate-level brass quintet providing them with his own published brass arrangements, goes to as many concerts as he can make as well as provides some concerts with his own musical arrangements and performs with the faculty brass quintet.

“I’m a supporter of all the ensembles at Texas Tech,” he said. “I go to every concert. I attend every football game, and watch the marching band.  I take pictures of all the trumpet students in their many ensembles posting them on my office ‘Door of Fame’. I could die tomorrow and be happy just from living this long awaited new life’s chapter experience in the few short months I’ve been here at Texas Tech.”