Michael Finke expected to play a key role in shaping the financial advisory industry in 2013. 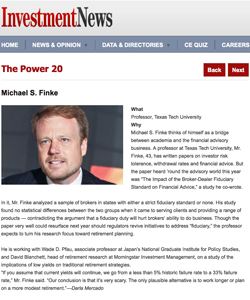 A professor of personal financial planning at Texas Tech was named to the InvestmentNews Power 20 list of men and women who will play a key role in shaping the financial advisory industry in 2013.

InvestmentNews noted research published by Michael Finke in 2012 that estimated the impact of proposed fiduciary legislation on the brokerage industry as the “paper heard ‘round the advisory world.”  The paper, published in the Journal of Financial Planning, investigated the behavior of brokers within states that had a stricter fiduciary standard and concluded that legislation requiring a fiduciary standard wouldn’t have an adverse effect on brokers’ ability to serve customers.  The industry had argued that a stricter fiduciary standard would harm consumers by limiting the availability of advising services.

“Part of our goal as the largest academic program in financial planning is to advance the concept of advising services as a profession,” Finke said. “Through our research on a number of topics, we’ve been able to improve the base of knowledge within the financial planning industry. We hope to have an even greater impact on the profession in 2013.”

Finke also will be the keynote speaker at the National Association of Professional Financial Advisors conference in 2013. NAPFA is the country’s leading professional association of fee-only financial advisors.