The duo now advances to the national championship in February. 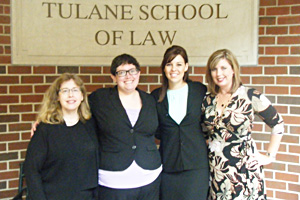 A Texas Tech School of Law duo recently won the regional competition of the ABA Law Student Division Negotiation Competition, hosted by Tulane University School of Law. The competition simulates legal negotiations in which teams seek the best outcome for their respective clients.

The winning team of third-year student Jessica Haseltine from Abilene and second-year Sara Norman from Midland were fresh off their second-place finish at the National Entertainment Law Negotiation Competition in October. Texas Tech Law emerged from the preliminary rounds as the top seed out of 24 teams, and then received unanimous number one rankings from all final-round judges. The team is coached by Professors Wendy Adele Humphrey (’01) and Nancy Soonpaa.

“I am very proud of the team’s dedication leading up to the competition, as well as the way they represented Tech Law at the regional competition,” Humphrey said.

The team now advances to the national finals, which will take place during the ABA Midyear meeting in Dallas on Feb. 8-9, 2013.

The February competition will bring together the top 24 negotiation teams from around the country to negotiate problems related to small business ventures.

“Due to Hurricane Sandy, the release date for the national problems was delayed until Jan. 21, so we will have only two and a half weeks to prepare for the competition,” Humphrey said. “Luckily, both Jessica and Sara have a passion for negotiating and will dive into the problems on day one. Getting ready for a negotiation competition requires a ton of work, from researching the legal and factual issues to doing practice rounds every day.”

Norman said the great thing about the negotiation competition is that it provides law student advocates with practical, real-world negotiating skills.

“Texas Tech Law is known around the nation for having stellar negotiation teams, and Jessica and I hope to bring home yet another national championship,” she said.

More information about Texas Tech University School of Law may be found at www.law.ttu.edu.