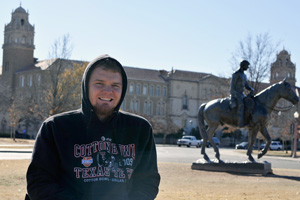 Although Texas Tech is a large school, Ben Cox likes that the campus feels like a tight-knit community.

On Saturday (Dec. 15), Benjamin “Ben” Cox will earn diplomas from Texas Tech University and Wayland Baptist University. He was a dual-enrollee and worked on a math degree from Wayland Baptist for several years before enrolling in the civil engineering program at Texas Tech. His undergraduate education will prep him to become an engineer—possibly for a department of transportation, as has always been his dream.

But on Saturday, Ben will not walk across a stage. He will not play the piano, and he will never play the sports he loves as he did growing up.

On March 17, 2011, Ben and his father went skiing at Monarch ski resort. Ben, who grew up in Colorado skiing and having fun on the slopes, saw a jump he wanted to try.

“When I hit the jump, I thought alright, I might catch 8 feet of air at the most,” Ben said. “Well, I ended up catching somewhere between 20 and 30 feet of air.”

Ben snapped his femur in three locations, shattered his C6 vertebrae, and bruised his spinal cord from C5 to C7 upon landing. It was the latter injury that paralyzed him from the chest line to his toes.

“I had to figure out how to live life again,” he said. “When I was in the hospital, getting out of my chair and into bed by myself just to take a nap was nearly impossible.”

Despite facing what Ben and his family thought were insurmountable odds, the Cox family were supported by family, friends and even strangers who helped Ben in a number of ways that helped him get back to his education. 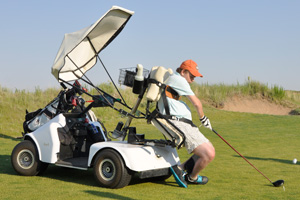 Ben also continues to play golf, thanks to his customized golf cart. (Photo by The Holyoke Enterprise)

Jim Colton, a walking golfer who took an interest in Ben’s story, undertook a mission to raise funds for Ben’s medical bills. As a way to raise money, Colton walked 155 sponsored holes in one day at Ballyneal Golf & Hunt Club in Colorado, the course at which Ben had worked as a caddie before his accident. Colton put together a network of golfers and courses called the Hundred Hole Hike, which aided Ben’s cause and other charitable causes.

In addition to Colton’s support, Ben’s family also received assistance from the citizens of Haxtun, Colo., Ben’s hometown; as well as from members of Ben’s church community in Lubbock, Harvest Christian Fellowship. The combined efforts resulted in more than $100,000 the Cox family put toward needed modifications on their home, a modified van Ben could drive, and Ben’s student loans.

At the time of his accident, Ben had about a semester and a half left to complete before graduating. The injury forced him to take about 15 months off from school. After a three-month stay at a rehabilitation center in Colorado, Ben returned home and learned how to live as normal a life as he could. He debated returning to Lubbock for school. Ultimately, however, Ben says his faith and church community in Lubbock encouraged him to return to finish his degrees.

“Even though Texas Tech is a huge school, my advisor knows me personally and most of my professors know me personally,” Ben said. “They all had heard about what happened and they were all willing to work with me.”

Ben’s advisor in the engineering department, Glenna Andrews, says Ben was never one to complain about his situation.

“He is some kind of special person,” Andrews said. “He has never been down and out when he has been on campus.  He has just muscled through with such a great attitude.” 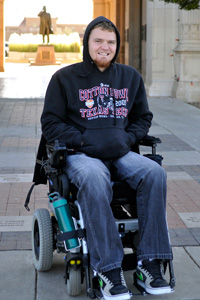 Graduating is just one of two upcoming milestones for Ben, who is marrying his fiancée Stephanie Cruz in the spring.

Ben knew returning to school would be a challenge. Along with supportive friends and professors, he motivated himself to do the best he could considering his circumstances.

“I figured out how to write in a matter of a month,” Ben said. “When I got to Tech, I was so determined to take notes for myself. But after the accident, my ability to retain knowledge has been changed a little bit. I had a friend that took notes for me so I could concentrate better. Professors have been really nice in giving me a day or two extra to get an assignment done, or some extra time in taking tests. But when it comes down to it, if I can do it, then I’m going to do it. I don’t want someone to do it for me.”

Ben says figuring out how to navigate campus in a wheelchair was difficult at first, but with some time, he has come close to mastering it. He attended all home football games this fall with his fiancée, Stephanie Cruz, and said stadium personnel were very accommodating.

Compared to most Texas Tech students, Ben’s day-to-day life is anything but ordinary. Getting ready for class in the morning can take up to two-and-a-half hours and he requires someone to help him do some everyday tasks.

However, he says that perspective helps him retain a sense of normalcy.

“I am glad I came back,” Ben said. “I’m glad I finished. Coming back, I had new appreciation for life.”

Ben’s life is now about “finding the joy in little things.” Ben and Stephanie plan to wed on March 17, 2013, the two-year anniversary of his accident. He says their decision on the date was intended to turn a negative memory into a positive one.