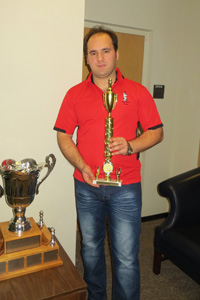 “It feels amazing,” Aleskerov said. “I believed in myself and knew I needed to concentrate and play all my games for one result: to win.”

The tournament victory fulfills Aleskerov’s final requirement for the title of International Master, which will be officially confirmed in January at the next meeting of the World Chess Federation (FIDE). Aleskerov says he now has his sights set on achieving Grandmaster status, the highest in chess.

“Our chess program is headed in the right direction,” Aleskerov said. “With all this support I don’t think it will take me long to become a Grandmaster.”

Aleskerov is a graduate student in Texas Tech’s Rawls College of Business. He has been playing chess for 21 years.