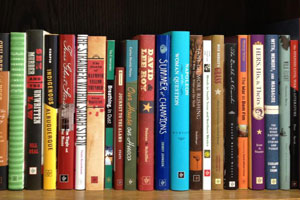 The press publishes 25 to 30 new titles every year and has about 400 titles in print on a range of topics.

TTUP has been on campus since 1971, a member of the AAUP since 1987, and one of only 90 university presses in America. The press publishes 25 to 30 new titles every year and has about 400 titles in print on a range of topics.

Robert Mandel, director of TTUP and former professor, hopes the events of the 75th anniversary as well as the recent move of the press will help raise visibility among Texas Tech faculty.

“It was a struggle for the press to raise visibility on campus and knowledge for what the press offers from our previous Fourth Street location,” Mandel said. “Being right in the center of campus helps make our services more accessible to faculty and improves the understanding of what the press does and what it does for our university.”

TTUP has new offices on the ninth floor of the new Media and Communication Building on campus. The central location on campus will help faculty become more aware of what TTUP has to offer and make TTUP more accessible.

During the AAUP University Press Week, Mandel will give the lecture “Getting It Published: Transforming Your Thesis into a Book.” He will provide suggestions and tips to faculty about how to take their thesis or dissertation and turn it into a book.

“I want to help them share what they know with the world,” Mandel said. “I will help them take something meant for an audience of five or six people and transform it into something for a worldwide audience.”

He hopes to offer TTUP as a service to junior faculty members because it is becoming more difficult for professors to publish books. Many of the authors published by the press are Texas Tech faculty, but other established authors also are published.

TTUP publishes books on different topics comprising of American liberty and justice; costume and textile studies; history and culture of Texas and the West, the Great Plains, and modern Southeast Asia during and after the Vietnam War; Jewish studies and literature; Latin American and Latino fiction; natural history and natural science; and sport in the American West.

“It is a testament to the cooperation that we have among all the university presses in Texas,” said Mandel.

TTUP collaborates with other presses around the nation. Some partnerships include joint exhibits and advertisements to help use multiple press resources to benefit everybody.

TTUP celebrates AAUP University Press Week with an open house and book sale Nov. 12–16 in its new headquarters. TTUP welcomes visitors to take part in these free and open to the public events:

TTUP Open House and Book Sale, 9 a.m.–5 p.m.: Come tour the press, visit with staff, enjoy refreshments, and take advantage of discounts of 25 percent to 75 percent on book purchases. The event will be held on the ninth floor of the Media and Communication building in the TTUP offices.

“Getting It Published: Transforming Your Thesis into a Book,” 4–5:30 p.m.: TTUP director Robert Mandel will give a lecture on how to successfully transform a dissertation into a book. This event will take place in room 166 of the Media and Communications building.