Texas Tech Once Again Honored as a Top School for Veterans

The university recently was ranked 29th in the country among four-year colleges by the Military Times. 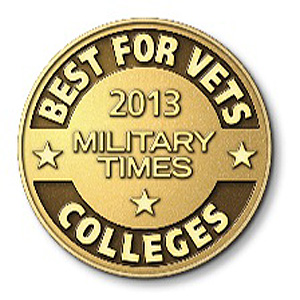 Texas Tech University recently was ranked 29th among four-year colleges in the Military Times 2013 “Best for Vets” list. Texas Tech was selected from more than 650 institutions that responded to a survey from the publication.

“Texas Tech accommodates veterans from the beginning of their collegiate experience through graduation,” Van Dusen said. “We have implemented veteran sessions during Red Raider Orientation, and provide academic support through Academic College Liaisons and in transition back to the workforce with our Veteran Career Program. All of our efforts are designed to make Texas Tech University more than veteran friendly. We are now a veteran supportive community.”

In the rankings, Texas Tech was recognized specifically for its relaxed residency requirements, accepting American Council on Education credits and for having an office dedicated specifically to veterans. Last year, there were 1,200 military-affiliated students enrolled at Texas Tech.

This is the second time this year Texas Tech has been recognized for its military friendly efforts, after being named to the 2013 list of Military Friendly Schools ® by G.I. Jobs Magazine in September. Juan Munoz, senior vice president for Institutional Diversity, Equity, and Community Engagement, said that these acknowledgments affirm Texas Tech’s commitment to all students.

“Texas Tech is proud of its continuing support of veterans and military dependents that honor the university as students,” Munoz said. “This recognition of Texas Tech’s efforts in support of veterans and military dependents further affirms its growing national reputation as a top tier institution of higher learning for students of all backgrounds, and most certainly for those who have served their country while in uniform.”