A 3-D laser scanner and surface-penetrating radar were obtained with the help of the Office of the Vice President for Research.

This image of the Fort Worth Power Plant was produced by the 3-D scanner.

Ten years ago architects and surveyors climbed ladders with measuring tape in hand and balanced along rooftop eaves in order to get precise measurements of structures. Although architects still use measuring tape today, surveying has become much simpler and safer thanks to technological advancements and newly developed equipment.

With assistance from the Office of the Vice President for Research, the College of Architecture has obtained two such state-of-the-art pieces of equipment: The Leica Scan Station C10 3-D laser scanner and the Seeker SPR ground penetrating radar system. These two high-tech imaging devices not only will assist with research projects, but also will provide architecture students with hands-on experience to better prepare them for futures in architecture.

“With rapidly changing technology we constantly need to upgrade our equipment so that Texas Tech University as an institution and the students we graduate remain competitive,” said Dr. Saif Haq, associate academic dean in the College of Architecture. “My thanks to the Office of the Vice President for Research for the assistance that allowed the College of Architecture to be ahead of this curve. We have already begun to see its benefits, and I am positive that this will substantially enhance our research mission.”

The Leica Scan Station C10 is similar to the college’s 3-D scanner that was used by architecture faculty and students on projects including the 3-D scan of the Statue of Liberty for the National Park Service. However, Texas Tech Architecture Professor Elizabeth Louden said the Leica Scan Station C10 is much faster, easier to use and more portable than the older equipment.

“It’s about 100 times faster than the one we currently own, and it features all onboard equipment,” said Louden, director of the Master of Science for Architecture with historic preservation specialization.

The scanner uses energy pulses to measure areas, buildings and surfaces with high accuracy. The scanner pulses out an eye-safe laser beam that blankets surfaces and reflects back to the scanner, producing a 3-D digitization of the surface. The scanner sends pulses of light at a rate of 50,000 times per second, creating 3.5 million points in less than two minutes. Those points, or XYZ coordinates, can be measured up to a quarter of an inch. The scanner is self-contained and has wireless capabilities. It also can weather the elements. The environmentally enclosed optics allows the scanner to be used in rain or dust, as well as in sunlight or complete darkness. 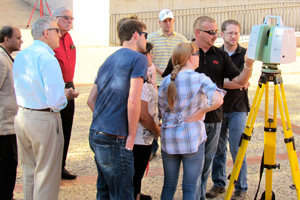 The Leica Scan Station C10 is much faster, easier to use and more portable than the older equipment.

Louden and 10 of her preservation studio graduate students put the new equipment to use during a recent two-day trip to Fort Worth, where they scanned the interior and exterior of the historic Fort Worth Fort Worth Power and Light Company Power Plant.

“It’s a huge building,” she said. “Imagine trying to measure every inch of the United Spirit Arena, including the roof, all in two days. The ability to measure the Fort Worth power plant in a short amount of time, without climbing on the roof, is incredible. Before laser scanners you had a hand tape measure, you had a drawing, you had a pencil, and you measured everything. You recorded it, you drew it, you recorded the number and then you moved on. Imagine taking enough measurements to measure a large building to be able to draw it accurately. Then you had to get on the roof, and that was dangerous and difficult.”

The students will use the data collected to create adaptive use proposals for the building.

The college also received the Seeker SPR radar system by US RADAR, a new type of scanner for the college. The radar noninvasively infiltrates surfaces, including soils, pavements and other structures. As the system is slowly rolled across the ground, the antenna transmits safe radio frequency energy pulses down through surfaces to a certain depth. The signal then bounces back to the system and is interpreted by the onboard software. The software creates a visual readout of the scan that can be seen immediately on a monitor, allowing surveyors to locate buried structures.

“There’s a density difference indicated in the signal that bounces back and so we know that there is an object there that could be old sewer lines, pipes, electrical conduit, foundations, archaeology, a variety of things,” Louden said. “So, you can understand where things are before you dig, like with electrical lines–it’s very important to look before you dig. It’s a measuring device, an analysis device, both of which are nondestructive.”

Both the ground-penetrating radar and the 3-D scanner are applicable in various fields of study, including science, engineering, archaeology, law enforcement and military, to examine soils and structures, locate graves, buried evidence and land mines, or survey crime scenes, among other uses.

“The 3-D scanner is very popular in forensics now: automobile accidents and crime scenes that can’t be in their set positions for very long,” said Louden. “So, the police will record the scene with the laser scanner, and that data is acceptable as evidence in a court of law. It’s an established technology.”

The new equipment will be available to all students and researchers at the university. In the spring, the College of Architecture will offer a materials deterioration and technology class that will partly focus on how to operate the new equipment as well as other existing technology, such as a thermography camera and other cameras used for documentation purposes. The course will be open to all students, not just those in the College of Architecture.

“We will be happy to train people in how to use them and even work with them in a collaborative way for whatever their intentions are, such as archeology, land surveyors, that sort of thing,” Louden said.