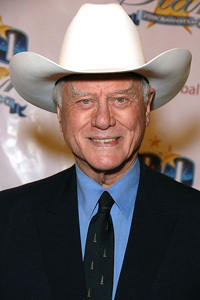 Tell me a little bit about how you heard the news and what went through your mind.

It was Saturday morning and I was listening to NPR on KTTZ-FM getting ready for the day. Thanksgiving was over and I remember thinking that he died as he had lived, grateful for his success, fame, legions of fans and friends and worldwide renown. He often said in interviews he never expected such attention for the role and the show Dallas. With that said, he loved the attention and I remember he was always jovial on the set and quippy with cast, crew and fans. I reminisced about being on the crew of Dallas for several years and thought about several that had died before him – Jim Davis (Patriarch Jock Ewing), Barbara Bel Geddes (Matriarch Miss Ellie) and Leonard Katzman (Producer, Director, Writer – the driving force behind the show.) I wanted to connect with 2 friends who I met on the show 33 years ago to remember Larry – Rody Kent, location casting director and Victoria Principal (Daughter-in-law Pamela Barnes Ewing). We discussed that it was sad, but that Larry had had a good run.

Several news agencies have reported that Larry Hagman was a great guy in real life, though he played the ultimate rogue. Would you agree with that?

He was like a cat with nine lives – his history of smoking and hard drinking were well known. He had survived a liver transplant, but died of complications to cancer. While I didn’t know Larry as well as others in the cast, it was apparent he relished life by the way he interacted with people on and off the set. He was a real character and quite eccentric from stories I have heard. One of the most apt tributes posted on the show’s website was Victoria’s - “Larry was bigger than life….on screen and off. He is unforgettable, and irreplaceable, to millions of fans around the world, and in the hearts of each of us, who was lucky enough to know and love him. Look out God…Larry’s leading the parade.” I chuckled when I read her mention of the parade, as one story I had heard was that Larry had a “quiet day” on Sundays at his beach house in Malibu. He didn’t speak all day, but donned a caftan and blew bubbles with a child’s bubble bottle and wand all up and down the beach. People would follow him like the pied piper, but did not speak. (You might need to verify this story, but it is totally in character with who I thought him to be.)

What is one of your favorite Larry Hagman memories from the show?

I remember the first year I worked on the show, I was 25, new to the business and wide-eyed. It was either the pilot or the first season of location shooting. I was assisting the accountant in the production office when it was necessary for me to make a run to the set. That first year, I did not work on the set and it was a huge treat to go visit. As it turned out, Larry and Patrick Duffy were due on the set and we all rode together. I was seated in the middle of the back seat between these 2 actors who would become as world famous as the Beatles, listening to them banter back and forth, and as it was, I knew of Larry from the TV shows I Dream of Jeannie and Patrick from Man from Atlantis. Needless to say, if for only an hour’s drive, I was living every woman’s dream back then.

Did you enjoy seeing the old cast with the new in the reboot of Dallas this year?

I am hooked on the new show. It has maintained the same writing style and craftiness and cliffhanger suspense. It is as campy as the old show. In fact, I went to the new Dallas website after hearing of Larry’s death to see what comments were being made about its upcoming season. I was remembering when Jim Davis died in April 1981 and what a blow it was to everyone on the set that summer shooting on Southfork. Our patriarch had died, but the show continued and Leonard Katzman re-wrote the script. In searching the website, I saw a video interview with Larry, Linda Gray and Patrick. The interview was entitled “Would Leonard Katzman approve of the new show?” All agreed that while the times were different, Lenny would have loved it….and he would have. You asked if I thought the show could survive without Larry. He was 81 and in frail health when filming began, so the show’s producers had to have contingency plans in place if his health took a turn for the worse. Larry would have agreed with the theatrical adage “The show must go on!”