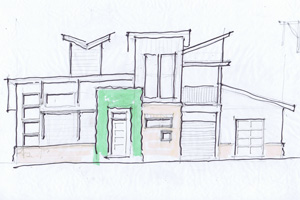 Donovan Davis, who graduated in 1984, sketched the design that was used for the house.

After a 30-year career in architecture, Texas Tech alumnus Donovan Davis was ready for prime time, or at least that is what producers at ABC were counting on when they asked him to assist in an upcoming episode of “Extreme Makeover: Home Edition.”

Davis is president of Austin-based Danze & Davis Architects Inc., a firm with a solid reputation for quality.

“EFC Custom Homes was first contacted by the show after the Bastrop fire,” Davis said. “We had worked together on other projects, and so they recommended us for this.”

The Bastrop County Complex fire is recorded as the most destructive single fire in Texas history, with two lives lost and $325 million in damage. It began as three separate fires on Sept. 4, 2011. Investigators say gusty winds toppled trees onto power lines at several locations that day, and the blaze likely ignited after sparks fell to the dry grass below. Flames spread and quickly merged into one massive wildfire that burned for nearly two months.

While Mizzy Zdroj and other unpaid heroes from the Heart of Pines Volunteer Fire Department fought the flames with countless other departments, more than 1,300 homes were destroyed. Not only did the fire take the home she shared with husband Chris and their twin sons, but her livelihood. When the smoke cleared, her farm and art studio were gone, and all their possessions – including Chris’ extensive Star Wars memorabilia, collected over a lifetime. 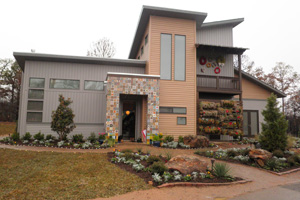 The home was completed in just four and a half days, with help from about 3,000 volunteers.

Rebuilding lives is literally what the Emmy award-winning reality series strives for. So by the time the fire was officially declared extinguished on Oct. 29, Extreme Makeover had already visited the site, accompanied by contractors and Davis.

“Everything was black. You might be able to make out a bicycle wheel among the piles of rubble,” Davis said. “It scorched everything near Buescher State Park. And it burned so hot that there was concern for an endangered toad that resided there. They were afraid the ground could not sustain life anymore.”

Several Bastrop families originally were under consideration – all of them firefighters. So while the Zdroj family knew they were in the running, their chosen status remained a secret, even from Davis.

“We were under strict confidentiality, so I didn’t want to accidentally say their name to somebody,” Davis said. “I knew their story, their lifestyle, their children and what they liked to do… but I did not meet them until the house was complete.”

The day after the tour, contractors joined show executives and other relevant people at Davis’ office to collaborate. He said it was like designing a custom home, without ever meeting the client. This was a departure for Davis, who also is accustomed to working alone during the creative process.

“The artistic people sat at my elbows all day as I sketched, then they’d look at it and go over it, back and forth until it was finished,” Davis said. “We couldn’t tell people in my office either. They were wondering who these people were, because they never see this happen.” 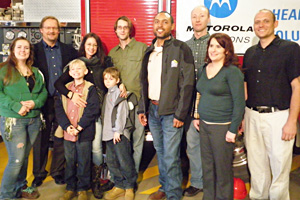 Davis, far left, is pictured here with the Zdroj family and other volunteers of the project.

Groundbreaking was only five to six weeks away, therefore cabinets and special-order items had to be purchased immediately while Davis finalized the plans. There was a push to go green on this project with regard to energy consumption, he said. It was important that the house was as cost-efficient as possible for the Zdroj family to maintain.

The home was completed in just four and a half days, with help from about 3,000 volunteers, BMX biker Mat Hoffman and Chef Art Smith. Even a few Imperial Storm Troopers pitched in to help, courtesy of a group of Lucas Films-approved Star Wars re-enactors called Vader’s Fist.

“It’s really a good story and the family was truly surprised,” Davis said.

This episode of Extreme Makeover: Home Edition will air at 7 p.m. CST on Monday (Dec. 3) on ABC, as a holiday special.

Davis, a second generation architect, graduated from Texas Tech in 1984. His son Harrison, also a Red Raider, graduated from the College of Architecture earlier this year.