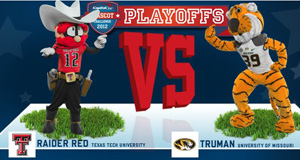 Raider Red will take on Truman from the University of Missouri in the first round of the playoffs.

Raider Red, Texas Tech University’s costumed public relations mascot has made it to the elite eight for the playoff rounds of the Capital One 2012 Mascot Challenge. Red took second place out of 16 mascots to contend for the most votes nationwide. The playoffs are a single-elimination vote over a three-week period.

“Not only is it a great honor for Raider Red to be selected for the Capital One All-American Team, but making it to the playoffs says a lot about our fan base,” said Stephanie Rhode, director for Texas Tech’s spirit squads.

“Since the playoffs are single-elimination, we need everyone to vote as many times as they can, all week long. Our regular-season week against Truman was one of our toughest,” Rhode said.

The playoff voting will be conducted in three rounds over a three-week period today (Nov. 26) through Dec. 17. Based on the mascot rankings at the end of the regular season, each mascot was given a playoff seeding ranging from No. 1 to No. 8.