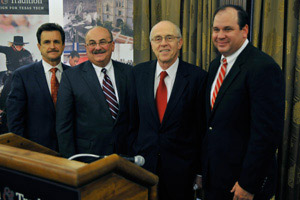 Officials at Texas Tech and Apache Corp. have announced a $2 million donation to the university’s Whitacre College of Engineering that will establish the Apache Upstream Research Center in the new Petroleum Engineering Research Building.

“Apache Corp. is an industry leader and a great corporate partner,” said Kent Hance, chancellor of the Texas Tech University System. “Its commitment to the Permian Basin, environmentally responsible fracking and future petroleum engineers is unmatched. We thank them for their contribution to Texas Tech that is benefiting our research enterprise, faculty, and students.”

This center will be an important aspect of the new Petroleum Engineering Research Building’s laboratories, focused on the latest environmentally responsible fracturing techniques including horizontal well drilling, rock mechanics, the energy-water nexus, wellbore integrity, and well cementing. Research will be conducted in the center by faculty members from multiple engineering disciplines and will advance the leading edge of fracturing procedures and environmentally responsible practices.

“Apache and the entire industry rely on cutting-edge technology such as horizontal drilling in tight shale and it is vital that the next generation of petroleum engineers come prepared to use the most advanced levels of technology and innovation,” said John Christmann, vice president of the Permian region for Apache. “We hope this donation plays a role in helping the center to develop these bright young engineers at Texas Tech to their fullest.”

In addition, both undergraduate and graduate students will have the opportunity to apply new knowledge and innovations to their engineering studies as these advancements are discovered. This will build upon robust theoretical and practical education that Texas Tech engineers receive.

Apache’s gift is eligible for an additional $2 million of matching funds from the Texas Research Incentive Program, created by the state of Texas. Once matching funds are received, the funding will support equipment purchases and research projects in the fracturing techniques center. 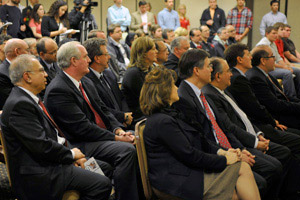 Many members of the Apache Corp. executive staff attended the presentation ceremony.

Apache Corporation is a Houston-based oil and gas exploration and production company with operations in the United States, Canada, Egypt, the United Kingdom North Sea, Australia and Argentina. Apache posts announcements, operational updates, investor information and copies of all press releases on its website, www.apachecorp.com.