The Red Raiders won by 50 points, and also won five of their six national contests this year. 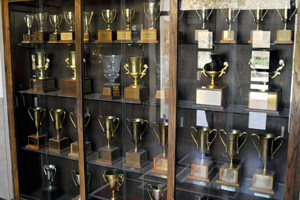 The national championship trophy will reside on the Texas Tech campus for the second straight year.

The team won the contest by a 50-point margin and also won five of the six national contests during the 2012 meat judging season.

“One of the most impressive things about this team is how well they responded to adversity,” said Mark Miller, Horn Professor and San Antonio Stock Show & Rodeo Distinguished Chair in Meat Science. “They courageously came back from a loss at the Eastern and committed themselves to working hard as a team to win decisively at the American Royal, Cargill and the International.”

In the alternate division, Texas Tech boasted three of the top-ten individuals overall.

The prestigious Rachel Hamilton Spirit Award, an award given in recognition of the commitment, dedication and teamwork displayed during a team member’s meat judging career, was given to Zac Miller.

The team was coached by graduate students Collin Corbin and Henry Ruiz along with Miller.

Rawls College of Business Moves Up in Accounting Rankings