Together they installed solar energy panels to help out the homeless.

Bob McDonald, director of the Area of Marketing at the Rawls College, helps assemble the solar unit.

In the inventory of provisions for human living, shelter and light are surely toward the top of the list. And for homeless Lubbockites living in Tent City, the recently donated military tents are a boon, keeping out the West Texas dust and wind – but they also keep out light.

Enter the Rawls College of Business Energy Commerce students to remedy the situation.

Energy Commerce Area Coordinator Terry McInturff explained the installation followed the methodology of his brainchild, the World Energy Project (WEP), which has taken students across the globe to help those in need. The trips are designed to educate students about energy poverty and the significance of basic energy needs in improving destitution. The group literally “lights up” provincial by designing and implementing community-based installations of solar home systems.

“The world has a pretty negative opinion of energy companies, which is without justification in most cases,” McInturff said. “These kids going to work in that industry get beat down by their friends and neighbors about greedy oil companies and I want the students to take pride in what we do. One-third of the world population lives without electricity.

“What I wanted to impress on them is if people can’t get out of energy poverty, they’ll never get out of financial poverty. As part of the Energy Commerce Program, we wanted a way for our students to find a way to give back. Our World Energy Project gives our students the opportunity to see the positive effect energy has on remote or underserved populations.”

In 2010 McInturff led 11 energy commerce students on its inaugural trip to the Costa Rican jungle to begin work on a world energy project called “Selva Luminosa” or “Bright Jungle.” The program partnered with Light up the World (LUTW), a non-governmental organization based in Calgary, Canada that provides basic energy needs to rural communities in developing nations. The partnership has endured and projects such as Tent City would not be possible without LUTW.

The past two years have seen the energy commerce students tackle projects in the Amazon and the Andes; and, after taking the WEP mission global, McInturff and others decided to bring the project to their own backyard.

“We were told of a need here in Lubbock, and it’s the right thing to do to give back to this community,” McInturff said. “We had current students, former students – graduates of our program who had gone on previous WEP trips – turn out to help. Community members and even our dean, Lance Nail, other Rawls faculty and recent distinguished graduate inductee Randy Golden came out to work.”

McInturff said that none of the money for the project came from Texas Tech. With support from local businesses and the community, everything for the Tent City venture was donated either monetarily or by in-kind labor, materials, even lunch for the volunteers.

Rob Buelna, a native of Los Angeles, came to Texas Tech after serving in the army. He and his wife are both undergraduates, and he hopes to enter the Energy Commerce Program next fall. In the meantime, he’s been helping McInturff with the WEP projects. 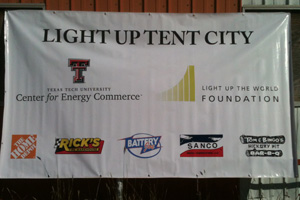 “I met Terry McInturff last year and found out he was taking a group of students to Peru,” Buelna said. “Even though I wasn’t in the program yet, I asked if I could go along because I thought I could be an asset to them.

“We installed solar panels in the Santa Rosa community, and when I saw what these panels and lighting systems do for people who don’t have them, it made me happy to be part of that.”

When McInturff talked about doing a similar project for Tent City, Buelna wanted to be part of it.

“I assisted Terry with the logistics of all of this, helped raise some money and donations – tools, supplies – everything we needed,” Buelna said. “We had terrific support from local businesses that supported the project.”

Stephanie Nguyen, a junior energy commerce major from Fort Worth, also travelled to Peru and has seen people in energy poverty both there and now, at home.

“It’s really great to be able to bring the project and resources to Lubbock, to Tent City,” Nguyen said.

“It’s sustainable energy, and the citizens here won’t have to rely so much on batteries every day, which get expensive. It’s a renewable energy that works here.”