The news is not good, as quail hunting season has just begun in Texas.

Three years into a five-year project aimed at stemming a massive decline of quail in Texas, researchers with a conservation alliance based at Texas Tech University are finding that last year’s blistering drought didn’t help that rescue effort one bit.

“Even though we’ve seen improvement in this year’s reproductive efforts, it’s important to look at reality,” said Brad Dabbert, Quail-Tech Alliance research project director and associate professor in Texas Tech’s Department of Natural Resources Management. “We’re coming off one of the worst droughts on record and we’re seeing a corresponding reproductive failure. While environmental conditions improved during winter and spring, we can’t expect populations to rebound in a single year.”

Starting in 2009, Quail-Tech Alliance and Texas Tech designated a 38-county research area in west central and northwest Texas, an area that encompasses more than 22 million acres or roughly 10 times the size of Yellowstone National Park. Within each of the counties, one ranch is designated as an anchor ranch to serve as a field research or demonstration site.

Among the historic ranches on the list attempting to save the small bird, known as a northern bobwhite quail, are the 6666 Ranch, Guthrie’s Pitchfork Ranch, Vernon’s W. T. Waggoner Ranch, Collingsworth County’s Mill Iron Ranch and Archer County’s Circle A Ranch.

While the Lone Star state’s historic drought inhibited reproduction over most of the Rolling Plains last summer – exasperating bird deaths over the winter – researchers are encouraged to see many birds in reproductive condition this nesting season.

“It’s amazing what a little timely rain can do,” Dabbert said. “We’ve had reports of broods in many areas of the Rolling Plains.”

Meanwhile, this fall the team is taking a closer look at another factor affecting quail longevity – predators. They’re initiated an ongoing program to monitor predator activity using cameras on the anchor ranches in the Quail-Tech Alliance program. The initial results are still being examined, but among the animals caught on camera are skunks, coyotes, raccoons, and, amazingly, a bobcat.

Separately, the research team is rapidly closing its most recent construction phase, which includes a Lubbock research facility with indoor work areas and outdoor pens. So far, the team has been focusing on the production of wild-strain, parent-reared chicks. 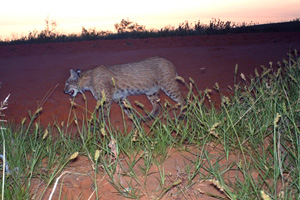 The team initiated an ongoing program to monitor predator activity using cameras on the anchor ranches in the Quail-Tech Alliance program..

Some of the released chicks are fitted with radio transmitters to monitor their survival and movements during the fall and winter. The goal is to place birds on the ground where habitat has been modified to be suitable for quail, but where drought or isolation has prevented timely colonization by wild populations.

The Quail-Tech Alliance, a partnership between Tech’s natural resources management department and Quail First, a Dallas-based non-profit organization, is conducting research and demonstration projects on an array of topics, including: