The university’s longest-serving horse will be celebrated during the next home game. 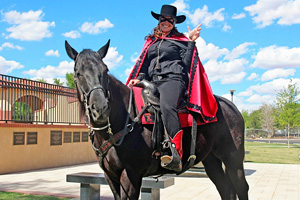 With 10 seasons and 11 riders under his bridle, Texas Tech’s Midnight Matador, the 13th horse to ride for the Texas Tech Masked Rider program, will be celebrated during Saturday’s football game at Jones AT&T Stadium.

Midnight Matador is the longest-serving mascot in the program’s history. Only Masked Rider horse Happy IV-II’s eight-year term from 1980-1987 is the closest in length of service.

The observance is expected to take place in the break between the first and second quarters of the game. All 11 riders who were carried by the black steed have been invited to attend the ceremony, one from as far away as South Dakota.

According to Sam Jackson, associate chair of the Department of Animal and Food Sciences, Midnight Matador can continue to make limited appearances throughout the remainder of the year.

“The horse is aging; and just like humans, there are things that become more difficult with age,” Jackson said. “He can walk and play – it’s the hard run on the field that we worry could injure him further. It’s like a football player being on ‘injured reserve’ – that player can walk out to the sideline suited out and watch the game, but he cannot go in and play.”

It is estimated that Midnight Matador traveled more than 100,000 miles to more than 1,500 university and community appearances, including a return trip to the Gator Bowl in 2007, the location of Joe Kirk Fulton’s Masked Rider tradition-starting run in 1954.

The Masked Rider Advisory Committee is discussing alternatives for a permanent home for Midnight Matador as well as reviewing options for selecting a new horse for the program.