The 13th horse in the Masked Rider program is the longest-serving mascot in the school's history. 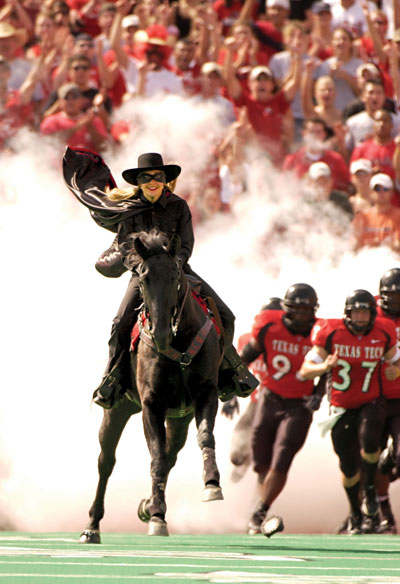 Midnight Matador will be honored in an official ceremony at the final home game against Kansas on Nov. 10.

Midnight Matador is the longest-serving mascot in the program’s history. He will be honored in an official ceremony at Texas Tech’s final home game against Kansas on Nov. 10. He also will continue to make limited appearances throughout the remainder of the year.

“Midnight Matador is truly a unique horse,” said Ashley Wenzel, current Masked Rider. “He has a personality like none other and I have truly come to love and adore him in a short six months. He will be missed by many and tough to replace.”

The Masked Rider Advisory Committee currently is reviewing and selecting both interim and permanent horse options for the program. Raider Red filled in for the Masked Rider at last Saturday’s game, surprising fans by leading the team onto the field on a Harley-Davidson motorcycle.

Former Masked Rider Stacy Stockard Moncibaiz, who rode in the 2004-2005 season, said Texas Tech has been fortunate to have Midnight Matador in the program and described him as truly exceptional at his job.

"He holds a special place in the heart of so many people,” Moncibaiz said. “It takes a special horse to do this job, and for him to start at such a young age and have such a long career is a testament to what a natural he is and how much he enjoys his work.

"When you make appearances at football games, rodeos, parades and other events, you never know what you might encounter. I always knew that, no matter what happened, nothing would unsettle him. I never had a reason to be nervous because I could put my trust in him. He’s the most fearless horse I’ve ever met.”

Midnight Matador was selected for the Masked Rider program in 2002 at the age of three from Hoggett Ranches in Bluff Dale. He has carried 11 Masked Riders down the football field in the traditional team-leading entry including Jessica Melvin, Ben Holland, Stockard Moncibaiz, Justin Burgin, Amy Bell, Kevin Burns, Ashley Hartzog, Brianne Aucutt Hight, Christi Chadwell, Bradley Skinner – the 50th Masked Rider – and Wenzel. Only Masked Rider horse Happy IV-II’s eight-year term from 1980-1987 is the closest in length of service.

It is estimated that Midnight Matador travelled more than 100,000 miles to more than 1,500 university and community appearances, including a return trip to the Gator Bowl in 2007, the location of Joe Kirk Fulton’s Masked Rider tradition-starting run in 1954.

Midnight Matador was featured on ESPN College Gameday, ESPN Road Trip, 60 Minutes, and in the American Quarter Horse Journal. In addition to home football games, he has run at home baseball games, the Alamo Bowl, the TicketCity Bowl, San Angelo Colts games, and Cowboy Stadium. He also starred in the Texas Tech University System's video for Vision & Tradition: The Campaign for Texas Tech. He has also been recognized by The Associated Press as one of the top ten coolest college mascots.