The school will work with the U.S. Department of Defense to recognize the war's 50th anniversary. 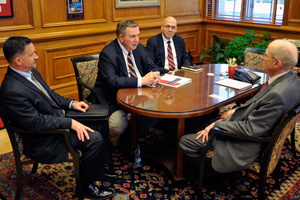 Representatives from the Department of Defense met with Chancellor Kent Hance on their visit to Texas Tech.

Therefore on the war’s 50th anniversary, the United States Department of Defense(DoD) is determined to right that wrong, and has chosen Texas Tech University to be the first university commemorative partner in the effort to honor Vietnam veterans.

“These veterans, in most cases, were not properly thanked or honored when they returned home,” said Lt. Gen. Mick Kicklighter, U.S. Army (Ret.) and director of the DoD Office of Commemorations. “They should have been thanked for their valor and service, and sacrifice. They did their duty and more.”

The United States of America Vietnam War Commemoration is the official title given to the program in the 2008 National Defense Authorization Act. It states that the Secretary of Defense will coordinate, support and facilitate other programs and activities of the federal government, state and local governments and other organizations in commemorations of the Vietnam War.

The Texas Tech Vietnam Center and Archive is the largest collection of such materials outside the National Archive system. Under the direction of Stephen Maxner, it is the center’s mission to collect and preserve the documentary record of the Vietnam War, and to encourage research and education regarding all aspects of the American Vietnam experience.

“We have been working with the Office of Commemorations since late 2009,” Maxner said. “Given their knowledge of and the established reputation of the Vietnam Center and Archive in Washington D.C. and at the DoD, we were at the top of their list as potential partners.”

The Vietnam Center and Archive has worked with the Defense Prisoner of War Missing Personnel Office, Joint POW/MIA Accounting Command, the various DoD military branch archives, and various circles regarding Vietnam War Studies. Maxner first met with Kicklighter at his office in Washington D.C. in Spring 2012, and he was subsequently invited to represent the Vietnam Center and Archive at the National Memorial Day Event, hosted by Secretary Leon Panetta and President Obama, which was also the official launch of the Commemoration Program.

“We are proud that Texas Tech is the first university in the nation to be chosen as a partner in this effort,” said Kent Hance, chancellor of the Texas Tech University System. “This is an outstanding opportunity to build on our efforts to honor Vietnam veterans and we are grateful to be a part of this mission.”

The Commemoration will, among other things, thank and honor the veterans and their families for their service and sacrifice on behalf of a grateful nation, including personnel held as Prisoners of War or listed as Missing in Action. 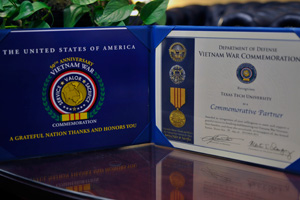 This certificate signed by the Secretary of Defense was one of the many items presented to Texas Tech by Kicklighter.

“We want to make sure we do everything we can to help our nation honor its commitment to the fullest accounting for those who did not come home,” Kicklighter said. “Families are still waiting and have been waiting a long time.”

Kicklighter recently visited Texas Tech to deliver the formal partnership invitation and to present the university with a commemorative flag, a certificate signed by the Secretary of Defense, and an official seal. He was joined by Col. Mark Franklin, U.S. Army (Ret.) and chief of History and Education, for the DoD Office of Commemorations.

Commemorative events began Memorial Day 2012 and will continue for 13 years through Veterans Day 2025, mirroring the length of America’s longest war.

“It's such a wonderful synergy and ability for us to build on what we've already started,” Maxner said. “We're tremendously honored to be the first university partner with the DoD Commemorations Office in their 50th anniversary commemoration program.”