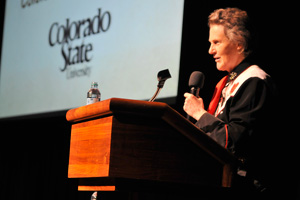 Temple Grandin spoke to students from the College of Education and also toured the Burkhart Center for Autism Education and Research.

Diagnosed with autism at age 4, Temple Grandin did not begin speaking until that age as well. Now, at 65, she effortlessly and frequently speaks to audiences large and small about growing up with autism, what teachers can do to help, and her passion for animal welfare.

Texas Tech University’s Burkhart Center for Autism Education and Research hosted Grandin as the guest speaker in the 2012 Burkhart Family Endowed Lecture Series. The lecture series brings distinguished lecturers in the field of autism education to Texas Tech University and the Lubbock community.

To the few hundred students, educators and others gathered in the Student Union’s Allen Theatre on Tuesday morning, Grandin reminded them that not everyone thinks the same.

“It was shocking to me to learn that not everyone thinks the same way,” she said. “The thing is, not everybody is the same. I’m a visual thinker. I think in pictures, not words. You get a kid with a label and they might have uneven skills. They may be good at art or math or writing, and terrible at other things. We have to fill up the area of their strengths. ”

Grandin spoke to several groups, including students with autism from the Burkhart Transition Center, Texas Tech students and faculty. She also spoke to educators from area school districts in the afternoon at the Region 17 Education Service Center and to a public audience on Tuesday evening.

Grandin also stressed the importance of teaching job skills to students as early as middle school. She said there are many skills in the technical industry, computer programming, industrial design, computer animation and other areas in which there are shortages of trained people that would be good for students on the autism spectrum to learn.

She also said teachers focus too much on students’ disabilities rather than their strengths; teachers should take more time to develop students’ abilities.

“Teachers and parents need to stretch kids outside of their comfort zone,” Grandin said. “They need to learn to do stuff other people want. That’s how they can be successful.”

A doctor of animal science and professor at Colorado State University, Grandin is one of the most accomplished and well-known adults with autism in the world. She also is an author and industrial designer whose own autism inspired her work of alleviating human and animal stress.

The subject of an award-winning biographical film “Temple Grandin” in 2010, she was listed in the Time 100 list of the most influential people in the world in the ‘Heroes” category.