About 500 reporters and expert speakers from across the country will convene in Lubbock. 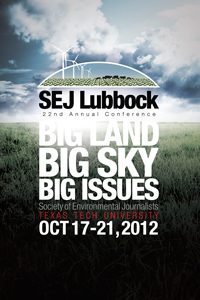 About 500 journalists, expert speakers and others from around the globe will descend on Texas Tech University to attend the 22nd Annual Society of Environmental Journalists (SEJ) Conference from Oct. 17-21.

During the event, Jill Tidman and Robert Redford’s son, Jamie, will present the film “Watershed.” The pair produced the film, which will be shown on Oct. 16 in Lubbock as part of pre-conference events. Also, an Oct. 18 pre-screening of Ken Burns’ “The Dust Bowl” will feature Dayton Duncan, a co-producer on the master documentarian's latest piece.

Each year, the society chooses a distinguished research university to co-locate its conference. This year’s theme, “Big Land, Big Sky, Big Issues” will cover topics such as Lubbock and the South Plains region, environmental toxicology, water use in an arid environment, oil and natural gas production, the cattle industry and the natural environment.

“This is a great opportunity for Texas Tech and West Texas to showcase what we do here,” said Lawrence Schovanec, interim president. “It will have a positive social and economic impact on our region as these reporters learn about us. We are proud to host such a venerable group.”

Bringing the conference to Lubbock was the idea of Ron Kendall, professor of environmental toxicology and special assistant to the president. After reading about a recent SEJ conference held at his alma mater, Virginia Tech, he said that he became intrigued with the possibilities of hosting a meeting at Texas Tech.

“I found out previous meetings were at Stanford and the University of Wisconsin at Madison – both of which are top-tier universities,” Kendall said. “This is a huge coup for Lubbock to bring this kind of organization in so that we, as academics and as a campus, can interact and establish relationships with its members. After this, we’ll have extraordinary outlets with which to communicate about our community and university, and make aware, particularly to industry research sponsors, our capabilities at Texas Tech University.”

The annual conference also takes journalists out into the field, with full-day or half-day tours to environmental hotspots where issues may be explored on-site with experts on hand to present all sides and answer questions.

“The SEJ community is eager to explore environment-related issues of the High Plains region open to direct exploration in and around Lubbock,” Parke said. “Our comprehensive agenda – with full-day tours, sessions and special events – will be enriched by the expertise of Texas Tech’s distinguished faculty. We are especially interested in the work of The Institute of Environmental and Human Health, so relevant to environmental contamination, wildlife toxicology and biodiversity issues. I have no doubt that sessions on these topics in Lubbock will be quite compelling and enlightening.”

Parke said the SEJ board has appointed Randy Lee Loftis, environmental writer for the Dallas Morning News, as SEJ’s 2012 conference chairman. He has been extensively involved in planning the 2012 program.

More about the SEJ

The Society of Environmental Journalists is the only U.S.-based membership organization of working journalists dedicated to improvements in environmental reporting.

SEJ programs are designed to build a stronger, better-educated and more closely connected network of professional journalists and editors who cover the environment and environment-related issues. SEJ’s primary goal is to advance public understanding of critically important environmental issues through more and better environmental journalism.

For a copy of the conference’s events, click here. Walk-in registration is welcome. Journalists interested in covering a specific event can pick up a press pass at registration (no meals provided). For more information contact Beth Parke at (215) 884-8174 or bparke@sej.org.