This is the first step in determining effects of carbon nanotubes in the environment. 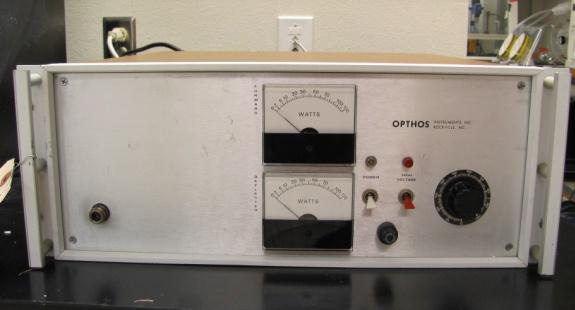 Green’s idea was to expose the sample to low-power microwaves and measure the resulting increase in temperature.

Carbon nanotubes (CNTs) could pave the way for remarkable technology, from improved computer chips, flexible computer screens or body armor, to health applications such as bone healing and cancer treatments.

In an effort to determine the toxicity of these materials, a group of Texas Tech researchers has successfully built a testing apparatus that can quantify the presence of CNT in a given sample. It is a process easier said than done.

A CNT is a carbon allotrope, just like graphite, charcoal, diamonds or graphene – the world’s strongest known substance.

To the layman, graphene is a super-thin sheet of carbon atoms arranged in a hexagonal “honeycomb” pattern. Conventional pencil graphite is simply many layers of graphene stacked together. When rolled into a tube, graphene forms a CNT, a fiber 100 times stronger than steel and six times lighter.

“What makes nanotubes even more remarkable is the fact that so many of their properties are off the charts,” said Micah Green, assistant professor of chemical engineering. “They are both electrically and thermally conductive, plus they are mechanically strong. It is rare that a substance would combine all three.”

Industrial uses are growing, as are concerns that these novel nanomaterials may have negative or unintended effects on organisms and the environment. With this in mind, environmental toxicologists at Texas Tech are exploring the fate of CNTs in biological environments and their ability to accumulate in soil, plants or other organisms.

One recurring question has slowed these studies: How can anyone be certain the tiny CNTs are present in the given sample?

“It’s like a needle in a haystack,” Green said. “How can you prove the effects of the needle, if you’re not sure that it’s really in there?”

Cooking up a solution

The impetus for the work initially began with a conversation between Green and Jaclyn Cañas, associate professor of environmental toxicology at The Institute for Environmental and Human Health at Texas Tech. Cañas described the problem of detecting CNTs in crop samples. Green suggested that exposing samples to microwaves could reveal the presence of even trace quantities of nanotubes. 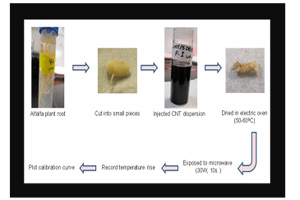 CNTs have the unusual property of evolving extreme amounts of heat upon exposure to microwaves, much more so than typical materials. In fact, nanotube powder will quickly and spontaneously ignite if placed in a conventional kitchen microwave. Green’s idea was to expose the sample to low-power microwaves and measure the resulting increase in temperature.

Mohammad Saed, an associate professor in electrical and computer engineering, joined the team to contribute his expertise in the area of microwave physics.

Together, the three research groups successfully built a testing apparatus and proved the concepts that microwave-based heating can quantify CNT loading inside a plant sample.

Preliminary tests resulted in a $300,000 grant from the National Science Foundation, awarded in summer 2011.

Continued development of the device led to a double-blind test, where a student was given samples of a specified CNT loading but was not told what the concentration was. Graduate student Fahmida Irin was principally responsible for applying the method. The double-blind test successfully duplicated the true values, and was then applied to studying the uptake of nanotubes into alfalfa plant roots grown in soil spiked with nanotubes.

“Since we started the method, we have started collaborating with other groups as well to look at the presence of nanotubes in organisms like earthworms,” Green said.

The method was recently published in a paper entitled “Detection of carbon nanotubes in biological samples through microwave-induced heating” by Irin et al. in the journal Carbon.

A patent application has been filed by the Office of Technology Commercialization at Texas Tech University to protect this unique method and technique.