They are using state-of-the-art technology in the college’s Center for Communication Research. 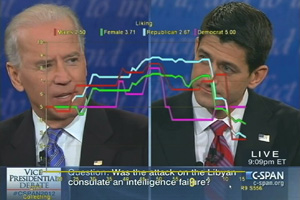 In the study, audience members use hand-held dials to indicate how they feel about what they see and hear during the debates. Click to enlarge.

Researchers in the College of Media and Communication are measuring audience reactions to the debates live, second-by-second, using state-of-the-art technology in the college’s Center for Communication Research. For the final debate, they will have people from the community participate. The research center will have 10 Republicans and 10 Democrats, a mix of men and women, watch and rate the debate performance in real time.

Erik Bucy, Formby Regents Professor of Strategic Communication, said there is value to studying people from different age groups, and they hope to do that during the final presidential debate Monday (Oct. 22).

“We can learn a lot by studying young adults whose political beliefs may be less crystallized, but we’d also like to include some voters and potential voters from outside the Texas Tech community,” Bucy said. “I know a lot of people here in West Texas are heavily invested in the next election, regardless of which candidate they support.”

In the study, audience members use hand-held dials to indicate how they feel about what they see and hear during the debates.

Glenn Cummins, director of the Center for Communication Research at Texas Tech, said the researchers can track viewers’ responses on screen grouped by audience characteristics such as party affiliation or gender.

“Of course, we still get numerical data that we can more formally analyze later,” Cummins said. “But seeing that live response in real time in a visual form lets us identify how people are responding both in general and to specific things the candidates are saying.”