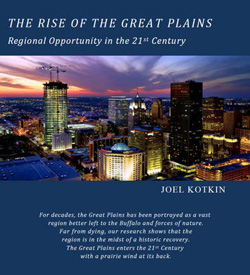 Since early pioneer days, many have maligned the Great Plains of America as a hostile environment unfit for habitation. That unfavorable sentiment hardly changed for the next 200 years.

However, new research conducted by Texas Tech University in conjunction with Joel Kotkin, the internationally recognized authority on global, economic, political and societal trends, and North Dakota’s Praxis Strategy Group predicts a boom in business for the once-defamed breadbox of the nation.

Thanks largely to Lt. Zebulon Pike’s description in 1806 as the Great American Desert, settlers took his words as truth that the area wasn’t useful for cultivation and kept moving.

In the new e-book, “The Rise of the Great Plains: Regional Opportunity in the 21st Century,” Kotkin and researchers show how the untapped growth opportunities will help this area thrive in the next 100 years.

“I think this should be looked at by government officials, academics, investors and business people,” Kotkin said. “Many will be surprised how robust the region has become. A particular desire would be to get urban and suburban developers to look at these as key growth markets. This is a very thorough project and covers a lot of new ground.”

Kotkin, who works with Praxis Strategy Group, said he began working on the project with Texas Tech after a speaking engagement at the campus. After meeting with former President Guy Bailey about possible ways Texas Tech could aid his research, he teamed with Kevin Mulligan at the university’s Center for Geospatial Technology to create the new book that details how the Plains will become a future player. 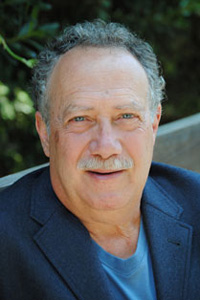 The book profiles how the Plains states no longer are suffering from out-migration and are experiencing growth faster than the U.S. average due largely to net in-migration from the coasts and increased foreign immigration.

Research also found that the area is driven largely by agriculture and energy and has enjoyed faster gross-domestic product, income and job growth than the rest of the nation, though that growth is mainly in cities and larger towns that create an urban archipelago across the region.

Mulligan, who wrote the chapter “Water on the Plains,” developed an online Atlas of the Great Plains for the project.  The atlas was designed and built to accompany the book.
The atlas provides a series of interactive maps that allows users to access more information about the Great Plains.

He said the group’s research shows that the Great Plains is outperforming the rest of the nation in job and wage growth. The agricultural sector is strong, exports are strong and the prospects for the future are good.

With the projected growth in world population coupled with the rise in the standard of living in developing countries, the demand for agricultural exports should increase significantly.  The manufacturing sector outperforms the national norm in a number of different categories.

A strong energy sector also promotes the strong future prospects. Today, more than 40 percent of the world’s drilling activity occurs on the Great Plains. The region is well-positioned to take advantage of wind energy as well.

“Lastly, the research challenges many common demographic stereotypes,” Mulligan said. “The Great Plains is not depopulating as some would have you believe. Rather, the population is increasing faster than the rest of the nation. The population also is not composed of a ‘bunch of old, white farmers.’ The region is just as ethnically diverse as the rest of the nation and it is attracting young families – especially to the mid-sized cities which offer the opportunities.”

Delore Zimmerman is the president and CEO of Praxis, an economic research, strategy and development company. He said the firm’s economic development consultants work mostly west of the Mississippi River and primarily with small to medium-sized metros that have strong roots in agriculture. 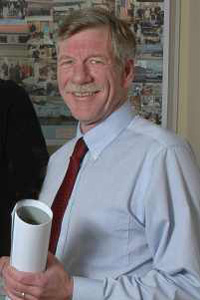 “The biggest change throughout the plains that is probably not as recognized as it should be is the urbanization that has taken place,” Zimmerman said. “The report does a good job of showing how the metropolitan and micropolitan cities of the Plains are operating on par with or exceeding the economic performance of major cities around the U.S.

Zimmerman predicted that precision, automated/autonomous agriculture is going to change the plains in ways that are yet unimaginable in the next 100 years. Precision agriculture is going to proliferate because efficient use of inputs and water is necessary to increase productivity to meet world food demand and continue to use the land in ways that have less impact on the environment. This will create abundant new opportunities in manufacturing and information technology.

“The western flank of the plains could fundamentally change its economy by using the proceeds from the energy boom to reinvent itself,” he said. “That could create some interesting dynamics with the eastern flank which is where most of the universities and technology-based development is now located.

“Eastern or western flank, a key will be to create stronger linkages with economies elsewhere in the world.  The USA is only 5 percent of the world market now so it is probably more advantageous for the Great Plains to connect with India, China, Eurasia and Africa than to New York City or Los Angeles.  We will have to develop the financial and business acumen here to do that on a larger scale.”

Kotkin, who usually works on demographics and futures in large cities, said he had known of the changes happening in Grand Forks, N.D., because of his affiliation with Praxis Strategy Group. He said that trend in North Dakota spurred him to learn more about this trend and to see if it was regional rather than just a local anomaly.

While technology corridors are emerging in many Plains cities and education levels in the north Plains are well above average, overall, Kotkin believes more emphasis should be put in these areas to sustain the growth.