The event was held in Los Angeles and featured 24 teams from across the nation. 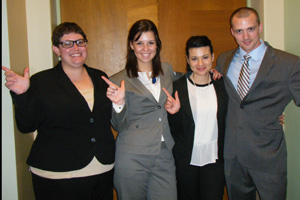 Two teams from the Texas Tech University School of Law advanced to the final round of the National Entertainment Law Negotiation Competition in Los Angeles over the weekend, resulting in yet another national championship for the school’s widely recognized advocacy program.

The competition, hosted by Southwestern University School of Law, featured 24 teams from across the nation and focused on the resolution of legal disputes in the entertainment industry. Both Tech Law teams received perfect scores in the tournament’s preliminary rounds before facing each other in the final.

“To have both our teams in the final round of a national competition and take the top two spots is simply astounding,” said Rob Sherwin, director of advocacy programs.  “It’s just disappointing both teams couldn’t be crowned national champions, because all four students deserved it.”

Sherwin said the teams’ performance was a combination of talent and preparation.

“We know our students are as gifted as any across the country, but you don’t win these competitions without a ton of hard work,” he said. “The teams and Professors Soonpaa and Humphrey worked so hard over the past month to bring this championship back to Lubbock, and we couldn’t be more proud.”

Office of the Provost Announces Reorganization