This marks the third straight victory, and sixth out of the last eight years, for Texas Tech. 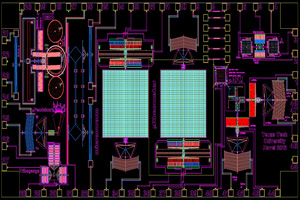 The winning entry can measure the behavior of thin quantities of liquid, like the synovial fluid in knee joints.

For a third straight year, Texas Tech University engineering students emerged victorious in this year’s design contest for novel microelectromechanical systems (MEMS), held at Sandia National Laboratories. Teams from Texas Tech have been winners in the competition in six of the last eight years.

The winning entry is a microscale rheometer that is 1.2 millimeters by 2 millimeters, and able to measure the behavior of thin quantities of liquid, like the synovial fluid in knee joints. This method requires a much smaller sample compared to the standard tool.

“It is much easier and, usually, less painful to obtain small quantities of bodily fluids from patients,” the students wrote in the project description.

“The interdisciplinary team was crucial to producing a device with important applications,” Dallas said.

The contest is open to institutional members of the Sandia-led MEMS University Alliance program, part of Sandia’s outreach to universities to improve engineering education. It provides an arena for the nation’s student engineers to hone their skills in designing and using microdevices. Such devices are used to probe biological cells, arrange and operate components of telecommunications and high-tech machinery and operate many home devices and strengthen national security.

The entire contest process takes almost nine months. It starts with students developing ideas for a device, followed by creation of an accurate computer model of a design that might work, analysis of the design and, finally, design submission. Sandia’s MEMS experts and university professors review the design and determine the winners.