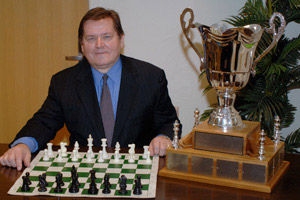 The American chess team recently completed a chess Olympiad in Istanbul, Turkey, with help from a bank of computers more than 6,000 miles away at Texas Tech University in Lubbock.

“It was the first time in history that an American team was helped by a bank of super-computers,” said Al Lawrence, director of the chess program at Texas Tech.

While the use of computers to aid playing during a game is against regulations, computers can be used for research and evaluation of anticipated positions in preparation for match-ups. Top players typically travel with their own laptops, but super-computers offer much greater analyzing power, according to Lawrence.

“The computer connection to Lubbock allowed us to analyze some critical positions much more deeply,” said John Donaldson, captain of the American chess team and holder of the title of international master.

The U.S. playing members each hold the highest title in chess, international grandmaster. Grandmaster Alex Onischuk, who played third board on the four-person squad, is coming to Texas Tech to become head coach of the chess program.

The chess Olympiad, which concluded Sept. 9, is held every two years in cities around the world. It is open to teams from any nation that is a member of the World Chess Federation.

The USA finished fifth among the 150 competing nations. Armenia took the gold medal. The U.S. team’s performance guaranteed it a spot in the 10-player invitational World Team Championship to be held later this year.