He needs your votes for a chance to win $20,000 for the Texas Tech mascot program. 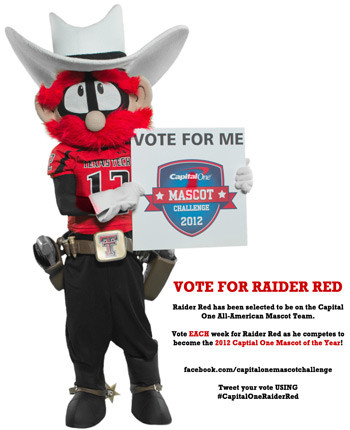 Raider Red is looking for a few – well, okay, many – guns ups from Texas Tech fans. The university’s costumed public relations mascot is one of 16 mascots to contend for the most votes nationwide in the Capital One All-America Mascot Team.

The Capital One National Mascot of the Year is determined by Internet voting, Facebook voting, and through Twitter hashtag voting. To vote on Twitter, the user must login and create a tweet that is tagged with the specific hashtag assigned to the mascot. Fans may vote for as many or as few mascots as desired. Votes are limited to one per day per Twitter account. Vote for Raider Red using #CapitalOneRaiderRed.

“This is a great honor for Raider Red to be selected as a member of the Capital One All-American Team,” said Bruce Bills, Texas Tech’s cheer and mascot coach. “Being chosen lets more people across the nation become familiar with the Raider Red program and Texas Tech.”

The 16 contestants were selected from among the mascot entries received from all eligible NCAA Football Bowl Subdivision and Football Championship Subdivision schools. A panel of judges from Capital One used the following criteria to determine the 16 team members:

The regular-season voting will be conducted over 12 weeklong voting periods beginning Sept. 3 (Monday). For each weeklong voting period, the 16 mascots will be paired in groups of two for a head-to-head matchup (eight matchups per week). Voters may cast an unlimited number of valid, legal votes for the mascot(s) of their choice.

The playoff voting will be conducted in three rounds over a three-week period Nov. 26 through Dec. 17. Based on the mascot rankings at the end of the regular season, each mascot will be given a playoff seeding ranging from No. 1 to No. 8.