Assistant Professor Miguel Levario shows how today’s ideas were implemented in the past and failed. 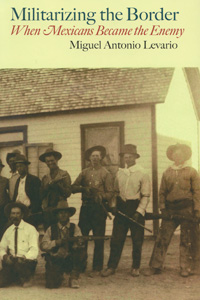 Headlines blare statistics on undocumented immigration, violence and racial antagonism on both sides of the boundary line as tensions and violence increase on the U.S.’s southern border with Mexico.

But to Texas Tech University assistant professor Miguel Levario, it’s just a matter of history repeating itself. Focusing on El Paso and the surrounding area, Levario’s new book, “Militarizing the Border: When Mexicans Became the Enemy,” examines the history of the relationships between law enforcement, military, civil and political institutions as well as local communities.

“My book uses a case study approach to the development of authority structure along the border that includes the U.S. military, National Guard, Texas Rangers and vigilantes and their affect on ethnic relations along the border,” Levario said. “This study moves the discussion of race and violence further by demonstrating that ethnic Mexicans emerged as an ‘enemy other’ due to the expansion of militarization along the U.S.-Mexico border. In addition, the book provides a historical precedent to some of today’s pressing issues of border security, immigration and assimilation dominating the political landscape today.”

Current tensions and controversy over immigration and law enforcement issues on the U.S.-Mexico border are only the latest evidence of a long-standing atmosphere of uncertainty and mistrust plaguing this region. Levario’s book also highlights a binational focus that brings to light other U.S.-Mexico border zones in the late 19th and 20th centuries.

Between 1895 and 1940, West Texas experienced intense militarization efforts by local, state and federal authorities responding to both local and international circumstances. El Paso’s “Mexicanization” in the early decades of the 20th century contributed to strong racial tensions between the region’s Anglo population and newly arrived Mexicans. Anglos and Mexicans alike turned to violence in order to deal with a racial situation rapidly spinning out of control.

“The book highlights how some of today’s ideas regarding border enforcement and immigration control were implemented in the past and failed,” he said. “Moreover, they further antagonized ethnic Mexicans (both American citizens and newly arrived migrants) in the United States because of the vitriolic rhetoric and actions made by American authorities and civilians.”

This evaluation of early U.S. border militarization and its effect on racial and social relations among Anglos, Mexicans and American Latinos will offer scholars, policymakers and community leaders a better understanding of current policy…and its potential failure.

“I try to use a case-study approach and historical analysis that underscores the human experience during larger events,” Levario said. “For example, within the context of the Mexican Revolution, the book highlights how the threat and occurrence of ‘spillover’ violence affected everyday ethnic Mexicans in the United States and their subsequent antagonization despite their innocence or guilt. In other words, when centers of power such as Washington, D.C., or Mexico City impose policy, it affects the people directly associated with its implementation.

“ ‘Militarizing the Border’ explores this question with great detail to understand how official and civilian authority interpret their rights and power and administer justice to an identified enemy of the state, which in this case are ethnic Mexicans.”