Huie says winning homecoming king was a milestone in his life that he will never forget.

Since graduating in 2001, Huie attended law school in Houston and now owns his own firm in Austin.

Ryan Huie was crowned Texas Tech’s first homecoming king in 2000. Since graduating in 2001, he attended law school in Houston and now owns his own firm in Austin with his law partner, Stephenie McCoy, who also is a Texas Tech alumna. Along with his law practice, he has started a Water Ski School on Lake Austin, named the Ski L.I.F.E. Academy. The acronym stands for “Life Is Fun Everyday.”

What was it like being named the first homecoming king?

It is a milestone in my life that I will never forget. I was absolutely honored and humbled to be chosen out of the 25,000 students to represent our school as the first homecoming king of Texas Tech. I asked my sister, Morgan, who was a sophomore at Texas Tech at the time, to be my escort on the field when they announced the winners. I’ll never forget how excited she was when they announced my name. She was jumping up and down on the 50-yard line yelling, “You won Bub! You won!”

What made yout the best candidate for homecoming king?

I think the students who voted for me would be better equipped to answer this question, but I’d like to think it was because I was genuinely nice to everyone I met at Texas Tech. I truly care about people. I also had a very diverse group of friends and acquaintances. I was active in my classes, involved with several different student groups, and was the president of President’s Select, where we worked as student ambassadors for the President’s Office and gave tours of campus. I have bled red and black since birth. My parents met and fell in love at Texas Tech. I didn’t even apply to any other schools.

How did winning affect your life positively? 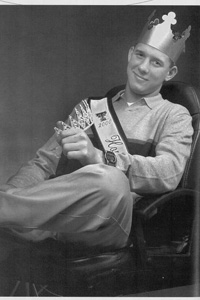 The top-grossing movie in 2000 was “Mission Impossible II,” and the top song was “Breathe,” by Faith Hill.

I was given the Texas Tech Hummer to drive around that afternoon after the game. THAT was way cool. It’s also quite the conversation starter when someone sees “First Homecoming King” on my resume. But all-in-all, I think winning mainly allowed me to affect others’ lives positively. As homecoming king, I was given the duty to uphold the spirit and tradition of Texas Tech, and to be an example of such spirit and tradition. I spent a lot of time at the first freshmen orientation at the Junction Campus helping to instill the spirit and values of Texas Tech into those new freshmen. It was a very rewarding experience.

Homecoming, to me, means nostalgia. Anytime I come back to Texas Tech’s campus, I am flooded with memories of a very exciting time in my past. Homecoming weekend is especially nostalgic because you are more likely to run into people you’ve lost touch with over the years. I appreciate the homecoming committee for all its hard work to make it a special weekend for all of us “old” alums.

What was Texas Tech like when you were here?

Texas Tech was full of life and growth. There were a lot of changes and shifts happening with plenty of new construction on campus, new leadership, and of course a dynamic football team with the likes of Kliff Kingsbury and Wes Welker at the helm. There weren’t many people staying inside on game days.

I think “Strive for Honor” is the absolutely the best motto or value that Texas Tech could instill in its students and alumni. If you carry it forward through your life, it will serve you even more than your degree will.