Garcia wants to remind students to root for the underdog and always follow your heart. 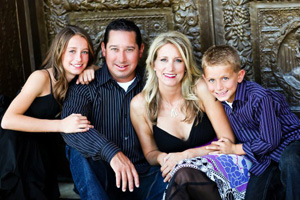 Garcia lives in Overland Park, Kan., with her husband and two children.

Angela Walker Garcia was Texas Tech University’s 1994 Homecoming Queen. She graduated from the university in 1995. Now she lives in Overland Park, Kan., with her husband and two children, and is a sales director at Automatic Data Processing, Inc. (ADP).

I can’t think of any words that would accurately describe the feeling when the announcer said, “The 1994 Texas Tech Homecoming Queen is…. (long pause)…. Angela Walker! Congratulations, Angela!” Being named homecoming queen is a proud moment for any young lady, and when they said my name I was shaking so much that I couldn’t move. I realized at that moment that I was one of a few women in the university that had the honor to hold this title. Winning homecoming queen is something I am proud of and will hold my head up high for a lifetime.

I was very involved at Texas Tech. I was the membership chair and then president of Zeta Tau Alpha, and I was a member of the business fraternity in the College of Mass Communications. I participated nearly every night of the week in intramural soccer. I also had really good grades, graduated with honors.

I am not sure that it was the accomplishments at Texas Tech that made me the best candidate, although I am certainly proud of them. Rather, I like to think it was because of my character and how I treat people with respect. I was nice to any and every one, regardless of what organization they were or were not involved with. I realized at an early age that all you have is your name. And, I worked hard for who “Angela Walker” was, and what I stood for. I have always been real down to earth with people. I think a lot of this, along with my leadership positions in the campus organizations, helped me to stand out with the judges, and with the student body vote. 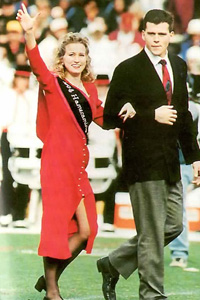 Being a college homecoming queen is truly an honor, and it has affected my life positively in many ways. The first thing that comes to mind is how I raise my daughter to be a loyal, true friend and to treat everyone with respect. Always stick up for the underdog. Never bully, and always stand up for what you believe in. Be a leader. Follow your heart.

Homecoming to me means coming together to celebrate your school with the student body. I think of the floats, bonfire, parade and the big game.  Homecoming is the special occasion that you get to experience with your friends and classmates.

A great university, much like it is today. I have always been proud to say that I am a Texas Tech graduate, and that “I’m red til I’m dead!” I also think of life on campus, and our campus is the most beautiful of any I’ve ever seen. The thing you never wanted to do would be to miss the bus to your next class on the other side of campus! Texas Tech will always have a special place in my heart.

I met my husband of 16 years shortly after I graduated, and we have two children together, Brittany, 15, and Brian, 10. As for my career, I have been with ADP for more than 10 years. I work in the TotalSource Division as a sales director, and have a team of 12 people. I have had the opportunity to qualify for President’s Clubs with ADP, and have been able to experience different parts of the world, most recently Rome, Italy.

Looking back, how will you remember your time at Texas Tech and as homecoming queen?

I am very proud to be the 1994 Texas Tech Homecoming Queen. It feels like just yesterday that I was able to share that exact moment of being crowned with my mother and my friends that were cheering me on. Being the homecoming queen of a major university is truly an honor, and it is with nothing but a smile on my face and a warm feeling in my heart when I think of my student life at Texas Tech. The honor was a testament to treating people with respect and being involved on campus and in my classes.