Erhardt says she will never forget riding on a convertible around Jones Stadium after she was crowned. 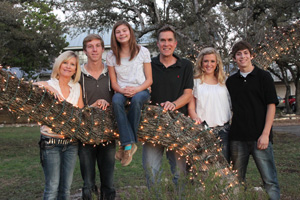 Erhardt is a neurology specialist in pharmaceutical sales and lives in Bulverde with her husband, Mark, and their four children.

Beth Ann Wright Erhardt was crowned homecoming queen in 1978 and graduated in 1979. She currently is a neurology specialist in pharmaceutical sales and lives in Bulverde with her husband, Mark, and their four children.

Being named Texas Tech University Homecoming Queen was such an honor and so exciting. I will never forget riding on that convertible around Jones Stadium after I was crowned. I actually was a candidate the year before as well, so it was nice to win my senior year. I think it reinforced that good things happen to average, small-town people.

Not at all sure that I was the best candidate. I think it may have helped that I was involved in a number of different organizations at Texas Tech. I was a cheerleader, a Kappa Alpha Theta, a Phi Gamma Delta little sister, a Raider Recruiter and very involved in the student ministry at First Baptist Church in Lubbock. 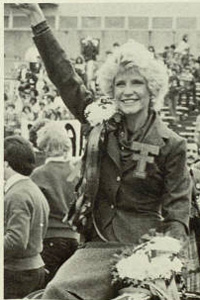 The top-grossing movie in 1979 was “Grease” and the top song was “Shadow Dancing,” by Andy Gibb.

I think it is an awesome opportunity for Texas Tech alumni to come back to Lubbock and celebrate all that Texas Tech meant to them and still means for students today.

Even though it was a large campus with thousands of students, and I came from the VERY small town of Menard (43 in my graduating class), I always felt that Texas Tech was so personal, such a great place for students to find connections. It wasn’t just students from the major cities of Dallas, Houston, etc, but a place where students from every city or town could find a home and a place to fit in and participate.

Wow. That's a lot of years. I have been blessed to be married to a great guy, Mark and I have four amazing kids, Cameron (21), Cooper (20), Addison (17), and Elena (14). We have enjoyed life in the Smithson Valley area for most of those years.

How will you remember Texas Tech?

I will always be thankful for the positive impact Texas Tech had on my life. The people I connected with there had a long-term effect on my spiritual growth and perspective. Go Tech!