Taylor was a twirler for three years and one of few female engineering students at the time. 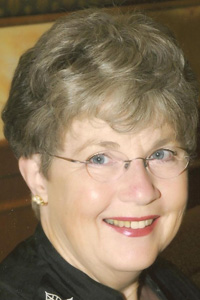 Pamela White Taylor was crowned homecoming queen in 1962 and graduated in 1963. Before retiring, she was an associate professor of computer science at the University of Texas at Tyler. She currently lives in Winnsboro with her husband Mark, also a Texas Tech alumnus. The two have four children and eight grandchildren.

Being named Texas Tech Homecoming Queen was truly the most exciting secular event of my young life: the coronation, the parade, being driven around the field at halftime and having the SMU cannon being fired as I was driven past it, not knowing whether it was out of respect or the other alternative. Either way, my hearing was affected for a time. SMU subsequently submitted an apology that was published in the Toreador. The excitement of being queen continued throughout my senior year by participating as a princess representing Texas Tech at the Cotton Bowl, then also representing Texas Tech at the University of Texas Roundup.

It is a fact that to be “popular” in college, you have to have exposure to the student body through the activities in which you are involved. On a lark, at the beginning of my freshman year, I decided to try out for twirler for the Goin' Band from Raiderland. It was Dean Killion’s first year. I was one of the six selected and remained a twirler for the remaining three years at Tech. That gave me a lot of public exposure.  I also played oboe in the concert band for three and a half years.

The engineering school had very few, if any, women students at that time. I was the only woman working toward an industrial engineering degree and do not recall any other women in mechanical, electrical or civil engineering.  This made me unique and added to the positive exposure. Other activities included Kappa Kappa Gamma social sorority, Alpha Pi Mu (Industrial Engineering Honor Society), and Engineering Representative to the Student Government. Plus, being elected an Air Force ROTC Sweetheart and Junior Class Favorite afforded me contact with yet others on campus.

It impressed upon me that no matter your perception of yourself, you can be perceived by others in an entirely different light. I perceived myself, and still do, as just an ordinary, but “real” human being. To be seen in the eyes of others as special and unique was an overwhelming, but humbling, experience. To this day, I never let it go to my head. I see it as one of the many exciting adventures God has granted me during my lifetime.

Homecoming to me is a time to reconnect with old friends, reminisce about our college experiences, and visit our old haunts. It brings back the beautiful memories of a carefree, fun and uncomplicated time of my life.

I was there in the early '60s, 1959 – 1963. Many of the 7,000 students came from 300 to 600 miles away.  Therefore, not being able to hop in a car and go home for the weekend meant that there was great attendance at the school and Greek dances on weekends throughout the year. The women’s dorms were well regulated as to the mandatory times the girls were required to be back in their rooms: 10 p.m. on weeknights and midnight  Friday and Saturday nights.  No men were allowed past the lobby. Personally, I liked the restrictions and was disappointed they were not in place when one of my daughters went to Tech in the '90s. 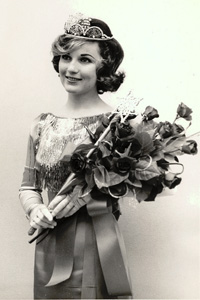 The top-grossing movie in 1962 was “Lawrence of Arabia,” and the top song was “Stranger on the Shore,” by Mr. Acker Bilk.

Girls were not allowed to wear pants on campus, short or long. I had to wear a skirt over my shorts when I went to twirler practice. I take that as a positive restriction also, as I see many girls in less-than-modest dress on most all college campuses this day and age.

The food in the dorm was less than palatable. There were no choices, no seasonings, and no leafy green salads; only orange and red Jell-O. Every now and then you absolutely had to go get a hamburger at Hi-D-Ho. Very few of the girls had cars so we would have to pile into the vehicle of one who did, or hopefully have a date with a guy that would treat us to dinner. At least in my case, the boys always paid for the date, never the girl.

To get away from it all, we would go to McKenzie Park and sit on a blanket to read or study during the day and “park” at night. I walked many places on campus and around town at night, alone, and never felt fearful.

By my senior year, enrollment had doubled and Tech seemed to begin to lose that warm sense of community that comes with a small campus – or maybe it was because I just was not as close and in touch with the newbies that were coming to Tech. Hopefully, they had great experiences there just as I did.

After graduating in June 1963, I worked as a systems engineer for IBM for the three years that my husband, Mark Taylor (’63), was in law school at SMU. We then moved, at the request of the government, to Tucson, Ariz., where Mark began his four-year commitment with the Air Force as a JAG officer. I then began a 16-year career as a stay-at-home mom with my four children: Rob, Amber, Zane and Heather.

After a two-year tour of duty in Karamursel, Turkey, during the Vietnam conflict, we settled down in Winnsboro, the home of my husband’s family for six generations since 1822. We built our dream home five miles out of town where we have now lived for 35 years.

At the age of 42, I decided to go back to college to get both a bachelor's and master's degree in computer science (there were no such degree programs at Texas Tech in the early sixties). That led to a Ph.D. from the University North Texas. I taught, while working on my degrees, for 16 years at the University of Texas at Tyler at the undergrad and graduate levels before I retired. My husband retired seven years later from serving as Wood County Criminal District Attorney for 28 years.

Presently, we enjoy working on our acreage.  We cruise for “getaways” and have all 17 of our immediate family, which includes eight grandchildren, over for the holidays. We are both very involved in our church, First Baptist, and I teach a ladies’ Bible study Monday nights. God has richly blessed us in many ways.