The funds will be used to help attract leading cancer researcher Igor Sokolov to the university. 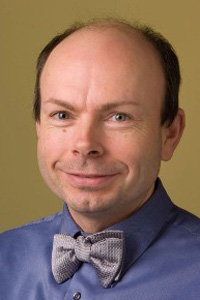 The Cancer Prevention and Research Institute of Texas (CPRIT) has announced a $2.5 million grant awarded to Texas Tech to help attract leading cancer researcher Igor Sokolov to the university. It is part of $114 million in funding to support cancer-fighting efforts in Texas.

Sokolov currently is a professor of physics at Clarkson University in New York, where he conducts extensive research using atomic force microscopy. He received his doctoral degree in physics from the D.I. Mendeleev Institute of Metrology in St. Petersburg, Russia.

“Dr. Igor Sokolov’s research in the early detection of cancer makes him an exceptional candidate to complement existing cancer research efforts at Texas Tech and Texas Tech University Health Sciences Center,” said Lawrence Schovanec, dean of Texas Tech’s College of Arts and Sciences. “He will be the first scientist in the state of Texas funded for an Investigators Performing Translational Research award and we are excited that he will be a faculty member of the College of Arts and Sciences and the department of physics.”

“This is a wonderful example of our perseverance in pursuing a competitive funding opportunity in support of Dr. Sokolov’s start up and his translational scholarship in biomarker detection,” said Taylor Eighmy, senior vice president for research. “Dr. Sokolov is a fabulous senior hire for us. It is imperative that we continue to explore these competitive funding opportunities with CPRIT. The persistent hard work of Dr. Sokolov, Dean Schovanec and Dr. Michael San Francisco in my office over the last four or five months to see this through is to be commended and sets the stage for others like this as we grow the research enterprise at Texas Tech.”

This is the second CPRIT Award made to Texas Tech’s College of Arts and Sciences. The previous award was for a project “Implementation Clinical Practice Guidelines for Treating Tobacco Use and Dependence in Oncology and Primary Care” in the amount of $299,306 to Lee Cohen and Susan Hendrick in the department of psychology.

“Thus far, CPRIT’s Scholar in Cancer Research program has successfully recruited numerous outstanding cancer researchers to Texas, and we hope Dr. Sokolov will become the next,” said CPRIT Executive Director Bill Gimson. “I am eager to see the impact his research has on the Texas Tech community, the state of Texas and the global fight against cancer.”

CPRIT was established in 2007 by Texas voters to fund groundbreaking cancer research and prevention programs and services in the state.