This year's 12 participants have been conducting intensive research as part of the Clark Scholars. 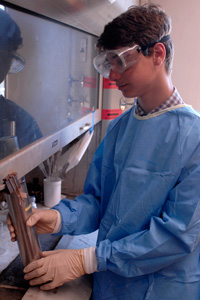 As part of the Clark Scholars some of the nation’s top high school students are brought to campus for an intensive research experience.

Jonathan Cohen is one of Forbes Magazine’s “30 Under 30.” Ritwika Mitra runs a worldwide nonprofit organization. Both are high school seniors and both have spent the last seven weeks on the Texas Tech campus gaining hands-on, high-level research opportunities as part of the Clark Scholars Program.

The program is designed to bring some of the nation’s top high school students to campus for an intensive research experience.

“The students work hand in hand with researchers at Texas Tech University and at the Texas Tech University Health Sciences Center (TTUHSC),” said Michael San Francisco, director of the program and associate vice president for research. “The Clark Scholars Program accepts students in every discipline, from the arts, to the humanities, to the sciences and engineering.”

This year’s class of 12 students worked in areas, including the biological sciences, engineering, classical and modern languages and literatures.

San Francisco has worked with the Clark Scholars Program for 15 years, and he continues to be amazed by the quality and involvement of the students.

“Some faculty mentors tell me these students come into their labs and really do graduate-level work,” he said. “But in addition to their academic excellence, all of these young people are already making huge impacts on the world around them.”

Cohen and Mitra are only two examples of the program’s impressive students.

Cohen, a senior from Highland Park near Chicago, has invented an aerodynamic shield that is placed on the front of school buses to reduce fuel use by about 25 percent. His project is called Green Shields, and it has landed him on the 2012 Forbes Magazine “30 Under 30” list, the "Banking on Youth Award" and a speaking role on a panel during Harvard’s Global Energy Initiative symposium.

Mitra, a senior from Freemont in the San Francisco Bay Area, founded the global nonprofit Renaissance Now with her sister. The humanitarian organization provides free tools, training, product development and marketing assistance to help underprivileged artists out of poverty. So far, her organization has trained more than 300 artisans and given tools to 500 others. She has also created a series of tutorials for cinematographers on YouTube, and the videos have drawn more than a million views, in addition to advancing the message of her organization.

While both students are already successful, the Clark Scholars Program has allowed them to make some decisions about college and their futures.

“I was looking for something that would let me do high-level research,” he said. “With many other programs you don’t get to write your own paper or participate at as high a level as the Clark Scholars Program allows you to. I think it has allowed me to have some insight into research and allowed me to know what I want to look for in a college.

"I’ve really enjoyed the research here, and I’d like to continue doing research in college, but I can see myself not continuing strictly as a researcher once I graduate, but using science and engineering applications.”

For Mitra, the Clark Scholars Program helped her to refocus her goals.

“The program gave me a research experience that not many students get to have at this young age,” she said. “It gave me the information to decide whether I want to go into a research field in college.

"I loved the research, but I don’t think it’s for me as a profession. I want to go into entrepreneurship. That doesn’t exclude doing research because a lot of research is about being entrepreneurial.”

The Clark Scholars Program was established 20 years ago by Texas Tech President Robert Lawless and Provost Emeritus John Burns with an endowment from the Anson L. Clark Foundation. It has provided nearly 225 gifted high school students the opportunity to work with Texas Tech’s outstanding researchers.

A Look Back: Summer Commencement Ceremonies