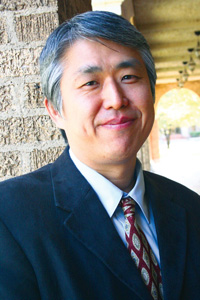 Lie and Tim Dallas, a Texas Tech microelectromechanical (MEMS) researcher and associate professor, along with a team of clinicians from the TTUHSC: Dr. Ron Banister, Dr. Andrew Dentino, Dr. Tam Nguyen, and Dr. Steven Zupancic, are collaborating with Texas Instruments on the multidisciplinary research. Technology like this could benefit not only the geriatric community but patients with balance issues from disorders such as Parkinson’s, epilepsy or dementia.

The first step is to build a database of the subject’s normal movements, including standing up and sitting. A significant future variation would then indicate instability, warning that a fall may be imminent.

“The alert may be attributed to muscular or visionary changes, or even due to drug interaction,” Lie said. 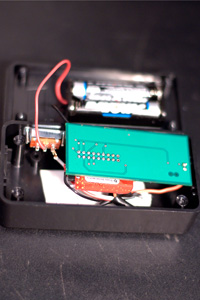 The fall-risk sensor could benefit not only the geriatric community but patients with balance issues from disorders such as Parkinson’s, epilepsy or dementia.

A team of medical clinicians receives the real-time patient data through wireless sensors made up of accelerometers and gyroscopes, Lie said. Their goal is to identify changes to posture and gait through sophisticated algorithms, analyzing a pattern that would indicate risk.

“It’s a complicated phenomenon,” Lie said. “We hope someday we will be able to tell the patient, ‘Sir, please be careful maybe in the next several hours or days ahead.’”

Placement of the sensor will require additional consideration, Lie said. The technology is small enough to be clipped to a belt, an accessory often omitted by the geriatric population and preferably near the T-4 region at the back (between the shoulder blades). A secondary option might be a pressure sensor insole that could also help acquire additional gait analysis. Conversely, one needs to be cautious as the insole device could also trigger a fall.

This research on “fall-risk identification and assessment using body-worn sensors” has recently been approved by a TTUHSC Institutional Review Board, which is a committee formally designated to approve biomedical and behavioral research involving humans. From there, the technology could prove useful in various capacities, from the geriatric community to vestibular (balance) research.

“There is a lot of research going on in this area,” Lie said. “We are humbled as we move slowly and methodically toward creating something useful.”