Clyde Martin was one of 13 accepted into the year-long appointment with the U.S. Department of State. 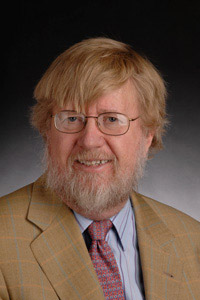 A Texas Tech University mathematics professor has left for Washington, D.C., for a year-long appointment as a Jefferson Fellow.

“I hope to learn a lot about working for the government and how the state department works,” Martin said. “I hope to make many contacts that will be useful for Texas Tech and the sciences in general. I will give whatever is needed to make myself, Texas Tech, mathematics and science in general useful to the State Department.”

The articulation of “accurate science for statecraft” to policy makers has become an essential element in establishing effective international relationships in the 21st century, according to the Jefferson Science Fellows website.

Recognizing this need, the Jefferson Science Fellows program at the U.S. Department of State was created in 2003 to establish a new model for engaging the American academic science, technology, engineering and medical communities in the formulation and implementation of U.S. foreign policy.

Fellowships are open to tenured or similarly ranked faculty from U.S. institutions of higher learning who are U.S. citizens. Selected fellows spend one year on assignment at the U.S. Department of State or U.S. Agency for International Development (USAID) as science advisors on foreign policy issues. Assignments are tailored to the needs of the hosting office, while taking into account the fellows’ interests and areas of expertise. The fellowship program is administered by the National Academies and supported through a partnership between the U.S. academic community, professional scientific societies, the U.S. Department of State and the USAID.

Martin’s research interests include control theory, the applications of algebraic and differential geometry to problems in numerical analysis, and the development and analysis of mathematical models in agriculture, the environment and medicine.

He led the Texas Tech group that did the detailed analysis and modeling of the 1987 measles epidemic in Lubbock. This research revealed for the first time that greater than 98-percent immunity rate was required to prevent measles epidemics in dense populations such as universities. The State of Texas used the research in the decision to require multiple vaccinations for all school-aged children.

His more significant technical contributions include the development of models for the analysis of localized epidemics and endemic diseases. He has collaborated with engineers and scientists in a number of areas including aeronautics, bioengineering, chemistry, pediatrics, plant science, soil physics, epidemiology and chemical engineering on a variety of scientific topics. He has published more than 350 technical books and papers in a variety of areas.

Martin is a fellow of the Institute of Electrical and Electronic Engineers and a member of the International Statistics Institute. He earned a bachelor’s degree in mathematics education from Emporia State University, and his master’s and doctoral degrees from the University of Wyoming. Earlier this year, Martin was named as fellow of the American Statistical Association (ASA).