John Paul Barrandey will serve as banner bearer for the College of Architecture at summer commencement.

Commencement to Include More Than 1,300 Graduates 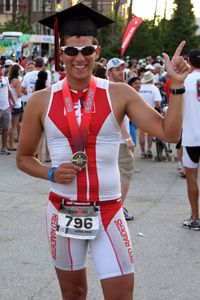 On graduation day in May, John Paul Barrandey didn’t walk across the stage. Instead, he traveled 140.6 miles under his own power in the Memorial Hermann Ironman Texas race in The Woodlands.

On Saturday, Barrandey’s trip will be remarkably shorter but just as impressive. He will carry the banner for the College of Architecture during summer commencement.

The Midland native dedicated the last four years of his undergraduate career to the study of architecture, and somehow found the time to train for what many regard as the world’s most challenging endurance event, the Ironman Triathlon.

Consisting of a 2.4-mile swim, 112-mile bike and 26.2-mile run, the Ironman demands physical and mental stamina from its participants for more than 140 miles in a single day. To put it into perspective, the total distance of Interstate 27, which connects Lubbock and Amarillo (124 miles), is shorter than the total distance of an Ironman Triathlon.

Balancing hours of training with hours of studying seems daunting, but Barrandey sees the two disciplines as complementary.

“When you have your own determination to wake up and work out, it’s no different than being disciplined to do your homework,” Barrandey said. “I was just really self-disciplined.”

Even though Barrandey maintains that keeping up with schoolwork was difficult at times, he will graduate as the highest-ranking student in the College of Architecture. A typical day for Barrandey includes an hour-long workout in the morning followed by class until late-afternoon. He then practices for 1-2 hours with the Texas Tech Triathlon team in the early evening, and finishes up studying until bedtime.

Barrandey transferred to Texas Tech from Texas State Technical College in 2008, where he received his associate’s degree in drafting & design. With several family members’ urging, he decided to enter the undergraduate architecture program at Texas Tech.

“They told me that Texas Tech takes care of their own and is great to the alumni,” Barrandey said.

Before transferring, Barrandey met several members of the Texas Tech Triathlon team at a Lubbock-area race. With their encouragement, he joined the team and became an active member, serving as vice president for two years and as president during the 2011-2012 school year. 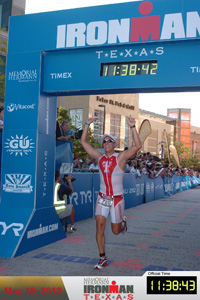 Barrandey's final time in the Texas Ironman was good enough for a top-ten finish in his division.

“The team is a huge part of my life at Texas Tech,” Barrandey said. “As president I wanted to make the new members feel the way the team made me feel when I first joined.”

Jamie Cooper, an assistant professor in the department of nutrition, coaches Barrandey and other members of the Texas Tech Triathlon team. She sees Barrandey as a natural leader for the team.

“He is intelligent, hard working, and dedicated to both his academic and athletic endeavors,” Cooper said. “At the same time, he is a great motivator to his fellow students and peers.”

The Texas Tech Triathlon team is a competitive club team. Its biggest race each year is the collegiate national championship held in April, which is an “Olympic” distance triathlon, a considerably shorter race than the Ironman.

Barrandey had to bump up his training mileage after collegiate nationals in April to prepare for the Ironman in May … right in the middle of Barrandey’s preparation for spring final exams.

“I’m not going to lie, it was tough to keep up with my schoolwork,” he said, laughing.

Barrandey finished Ironman Texas in just under 11 hours and 39 minutes—a time which garnered him a top-ten finish in his division. In addition to the full Ironman, Barrandey has completed four Ironman 70.3 races and two full marathons. Despite the physical toll each endurance race takes on the body, Barrandey claims that the real challenge is mental.

“The hardest thing to overcome is the unknown,” Barrandey said. “Mentally, it takes a toll on you. The day of the race is an emotional rollercoaster of nerves and adrenaline.”

Despite his nervousness, Barrandey completed the race and can call himself an “Ironman.” Soon, he will call himself a master’s candidate, as he plans to pursue a master’s degree in the College of Architecture beginning this fall.

But on Saturday, Barrandey is a graduate of Texas Tech.

“I think it’s kind of like the feeling you get when you cross the finish line,” he said of graduating. “It was worth it. There’s so much sacrifice in training and in studying; staying up late and waking up early. But everything was absolutely worth it.”