John Chebret and alumnus Logan Lefler will help a group cheer at the men's basketball semifinals and final. 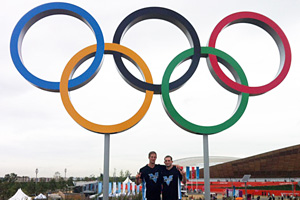 Chebret, left, pictured alongside Lefler, described the trip to the London Olympics as a once-in-a-lifetime opportunity.

While cheerleading may not be an official sport yet, a group of U.S. cheerleaders is in London to cheer for the men's basketball semifinal and finals as part of a cheer squad sponsored by Varsity brands, the worldwide leader in cheerleading training.

Texas Tech's cheer team will be represented by one current member, John Chebret, a junior exercise and sport sciences major from Humble; and one alumnus, Logan Lefler, a 2008 business graduate from Combine. Both men are staff members of the Universal Cheerleaders Association, one of the Varsity training branches, which led to them being selected for team.

"I'm beyond excited to be selected for this once-in-a-lifetime opportunity," said Chebret, a three-year member of the Texas Tech squad.

The group arrived in London on Monday and is readying for performances. The squad comprises outstanding college cheerleaders and top instructors from throughout the United States, the birthplace of organized cheerleading. The team will entertain the crowds and television audiences with choreographed cheers, stunts and tumbling, and a performance during a halftime show. The men's basketball semifinals and final are Friday (Aug. 10) and Sunday (Aug. 12) respectively.

"I'm very proud of John and Logan for getting this opportunity," said Bruce Bills, Texas Tech's cheer coach. "Both are elite-level cheerleaders who will be great representatives of Tech Cheer and the USA." 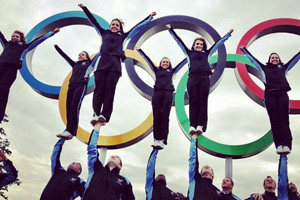 The cheerleaders are performing as part of Varsity brands, the worldwide leader in cheerleading training.

The team of American cheerleaders will be working closely with the Ascension Angels from the London Borough of Newham, coached by Angela Brown, who initially contacted the group. Organized cheerleading now has a foothold in more than 100 countries, and the United Kingdom has maintained a prominent presence in cheerleading in Europe.

"We are thrilled to be bringing top-notch athletes to London to lead the crowd in cheering on the competitors," said Jeff Webb, founder and CEO of Varsity. "As cheerleading makes strides to become an officially recognized sport, we welcome the opportunity to show the world what cheerleading is all about."

Varsity was founded by Webb in 1974. Each summer Varsity staff train 350,000 cheerleaders and dancers in all aspects of spirit leading.