Law students gain first-hand experience from working on real cases throughout the region. 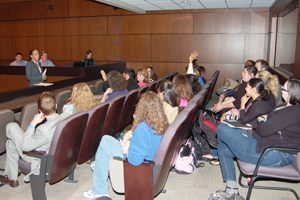 When John (his real name is withheld for legal reasons) was stopped for a traffic violation in a small town in West Texas, the local law enforcement also thought they had a DWI on their hands. They did field sobriety tests and claimed he failed them. When they took him to the station and had him give a breath sample, John blew a .118 and a 1.21.

But they did not make John blow the breathalyzer test until more than an hour after he was arrested. John maintained that he was not intoxicated when he was stopped and fought the charge with help from the Caprock Regional Public Defender Office (CRPDO).

The CRPDO, a program administered through the Texas Tech University School of Law Clinical Programs and funded by a Texas Indigent Defense Commission grant to Dickens County provides representation to indigent and juvenile defendants in 16 counties in Northwest Texas.

In a rare decision, John’s legal fight was successful, even with blood-alcohol content above the legal limit at the time of the breathalyzer test; that is to say, it may not have been above the legal limit at the time he was stopped and the prosecution could not prove otherwise. This victory for John meant no DWI charge on his record, a predicament that, though perceived by most as common, can make some simple things difficult in one’s life. Misdemeanors such as DWI carry collateral consequences such as preventing one from getting a job, keeping a driver’s license or owning a gun.

Charlie Pelowski, assistant chief public defender, has explained John did well on the sobriety tests and looked sober in the video. Ultimately the jury agreed. The science behind alcohol metabolism was one of the technical points that helped John get a “not guilty” from the jury. His state-appointed attorney team was the other. 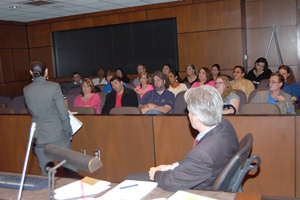 The CRPDO works to give access to legal counsel and increase the quality of representation provided to indigent citizens and juveniles accused of crimes.

The CRPDO works to give access to legal counsel and increase the quality of representation provided to indigent citizens and juveniles accused of crimes. The CRPDO uses a cost-effective delivery model for indigent defense services and uses experienced defense counsel, and the resources available through the Texas Tech School of Law, including the assistance of qualified law students. The program is the first of its kind and will serve as a model for the state of Texas and possibly the entire country.

“There is a federal case that established the state’s requirement to appoint attorneys to criminal defendants,” Pelowski said. “States passed the responsibility on to the counties, and a lot of them don’t have the income and aren’t able to pay like other counties. Because of the grant, for the first two years the counties aren’t paying anything for our services.”

Donnie Yandell, a 2001 Texas Tech Law graduate, was hired as the chief public defender for the CRPDO in November and Lesley Washington (SMU Law ’03) was hired as director of operations and communications. The office began taking cases in January.

“The area covered by this office is nearly twice the size of New Hampshire,” Yandell said. “One of the big problems with having a public defender’s office covering that large of a region was being able to contact our clients. The grant allowed us to use technology solutions to solve this by putting the computers and cameras in each of the court houses in the region we cover.”

The Texas Tech School of Law has a well-established Criminal Defense Clinic directed by law professor Pat Metze. The clinic has extensive procedures and serves as a model of effective student supervision in the delivery of indigent defense services, which have been integrated into CRPDO program. The quality of legal representation from the CRPDO is enhanced by using energetic third-year Texas Tech law students closely supervised by experienced defense attorneys Yandell and Pelowski.

Metze would like the partnership between the law school and the CRPDO to be a model for other law schools in other places.

“This model shows that it’s possible for these kinds of partnerships to provide legal services to poor and indigent in rural areas, who otherwise might not have access to legal defense,” Metze said. 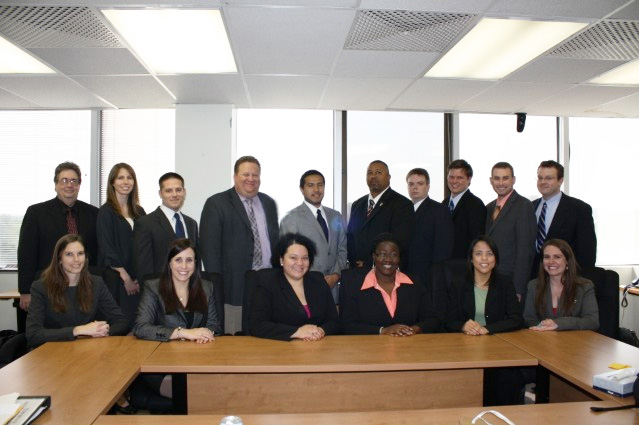 The 2011-2012 public defender clinic included 12 law students, and officials hope that within two years the clinic will expand to three lawyers and a maximum of 24 students.

Twelve more students were recently selected for the 2012-2013 clinic experience. Yandell said the hope is that within two years the clinic will expand to three lawyers and a maximum of 24 students.

Pelowski said the students are fully responsible for their cases, from intake through disposition.

“They will be the ones contacting the clients, not me,” Pelowski said. “They will be doing research for the case, not research for me. They get to handle the cases just as if they were in a private practice. We will be supervising them making sure they’re doing what they’re supposed to be doing. Regardless of the case outcome, whether it’s dismissed, plead out or goes to trial, the students will be the ones responsible for it. So they’re getting real-world experience while they still have the safety net of experienced attorneys to oversee what they’re doing.”

A classroom component of the clinic focuses on skills development, ethics and case strategy related to criminal law. Students also have the opportunity to hone their writing skills by drafting motions.

Another primary goal of the project is the opportunity to use interdisciplinary research to inform the bench, bar, governmental entities and criminal justice stakeholders as to cost-effective methods of delivering indigent defense services in a way that could be a model for replication in other underserved areas.

According to Pelowski, on average, 35 percent of criminal cases in the State of Texas have court-appointed attorneys. In most of the counties represented by the CRPDO they average 3-10 percent.

“We aim to educate the court systems in these areas as to what we’re here for, which people need to have attorneys appointed, how to go through that process,” Yandell said. “We hope to get our case load up so that these counties are in line with the rest of the state.”

That gives counties a chance to offer their citizens the opportunity to comply with the Sixth Amendment. And, Yandell said, it gives the clients the opportunity to have a zealous advocate in their favor and to have someone who really tries to help them out.

As far as the students’ involvement, working as part of the Caprock Regional Public Defender Office gives students real-world experience.

“It is our hope that when a student walks out at end of their third year, they can open a criminal law practice on their own with all the knowledge they need without having to worry about ‘what is a county attorney and what do they do? What do I do with prosecutors hard to get along with? What about clients who are hard to get along with?’ They’ll have that experience before they ever graduate from law school,” Yandell said.

And for John, having experienced help and an advocate was a good thing for his future, with no DWI on his record.

“That was a huge win, both morally and legally for the client,” Pelowski said.

In the Students' Opinion

"My clinic experience has been one of the hallmarks of my law school career. I have been given the opportunity to experience first-hand cases that range from assault to possession of drugs. I’ve gained invaluable experience in how to approach a case, handle clients, and work with prosecuting attorneys. The lessons and experience I have learned are ones that many of my peers who have graduated law school wish they experienced to be better prepared for what a lawyer really does."

"Being a part of the first group of student attorneys of the Caprock Regional Public Defender Clinic is an honor that I will forever cherish. This opportunity has been great practice experience; but more importantly, it has reinforced my belief that our criminal justice system needs more attorneys who are in this fight for the principle and not the money."

"The Caprock Regional Public Defender Office really does allow you to practice law in the small counties around Lubbock. You will be able to interview clients, negotiate with county attorneys, research, write memos and, of course, go to court. I recommend it for those that are passionate about advocacy and justice for those that are traditionally unrepresented."